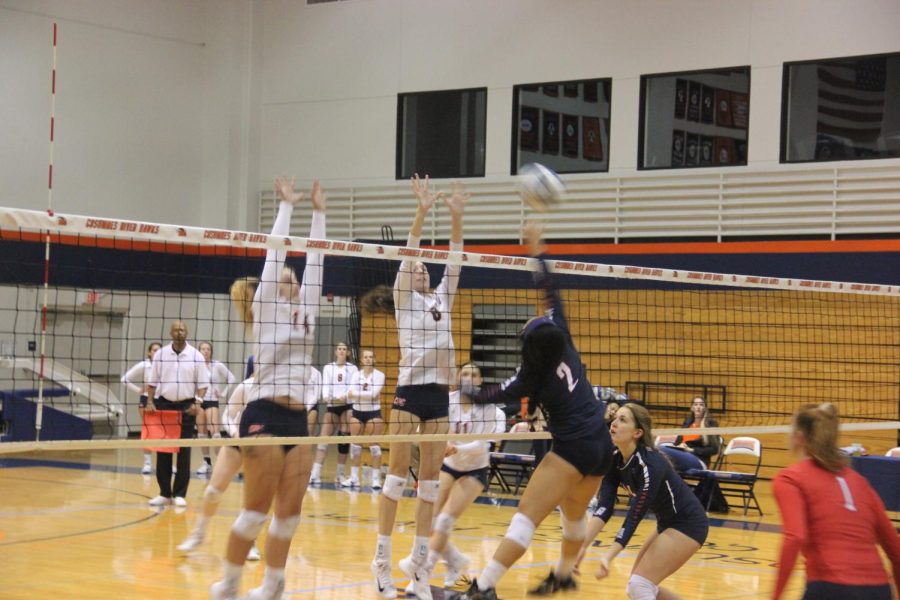 Outside Hitter Rebakkah McLaughlin (left) and Opposite Jade Griley block against the Beavers on Nov. 3.

The women’s volleyball team hosted the American River College Beavers in another rivalry matchup, and this was literally a battle to the end; the Hawks went through five sets, but still fell 3-2.

With two games left in this season, and with a 8-15 record and a 12-game losing streak, the Hawks still fought and challenged the Beavers to go through five sets and see who came out on top.

“We were focused on mixing things up going to different spots, and for the most part we did that really well tonight, and that’s what made a big difference in tonight’s game,” Hawks Assistant Coach Brandon Merritt said.

In the first game set, Hawks Head Coach Kari Post had a different lineup; she started Defensive Specialist Esmeralda Hernandez, Outside Hitter Rebakkah McLaughlin and Middle Blocker Destanie Elliott. Post kept rotating everyone, and it worked for the results tying the game at 22-22. But, ARC took set one 25-23.

As the second set began, the aggression and versatility were with the Hawks as they took a 12-6 lead, forcing ARC to take three timeouts. An intense battle led the Hawks to cruise over the Beavers in a 25-23 win to tie up the sets.

In the third set, the Hawks were in control and being patient being ready to take their shot. The Hawks defended well, and more communication and different lineups progressed the Hawks to take set three 25-23, leading 2-1 in this series.

With a 2-1 lead, the Hawks tried to close this game, prompted by the encouragement and high energy that Defensive Specialist Carlee Barmby brought to her teammates.

“We try really hard, I always like to stay as positive as possible because there has to be an excitement to volleyball, and if you’re not having fun, then what’s the point?” Barmby said.

As the fourth set began, the Hawks had another chance to close this series, and energy was with them. ARC attacked first with a 5-1 lead in the first three minutes, and they beat the Hawks 25-19 to tie the game going into the final set.

“Our ability to finish up to 25 points each time that I was proud of, and we haven’t taken the setoff to ARC in six years, and going into five sets is a really big deal,” Defensive Specialist Maya Young said.

The final set of the game was to 15 points,; the Hawks were focused and determined to take the final set, and with that they took a 5-0 lead. In Young’s words, “We played Yahtzee,” which meant that Post had a tally chart telling the players when to rotate.

As the set went on, it was tied at 9-9. The Hawks stayed strong to the very end, but fell short in a hard loss to the Beavers with the final score 15-12.

With two games left, Post said the expectations for the Hawks are high.

“It gets us more excited because we’re doing things that we needed to do, and we’re executing in the next two matches,” Post said. “We can beat these teams, especially if we play like this.”