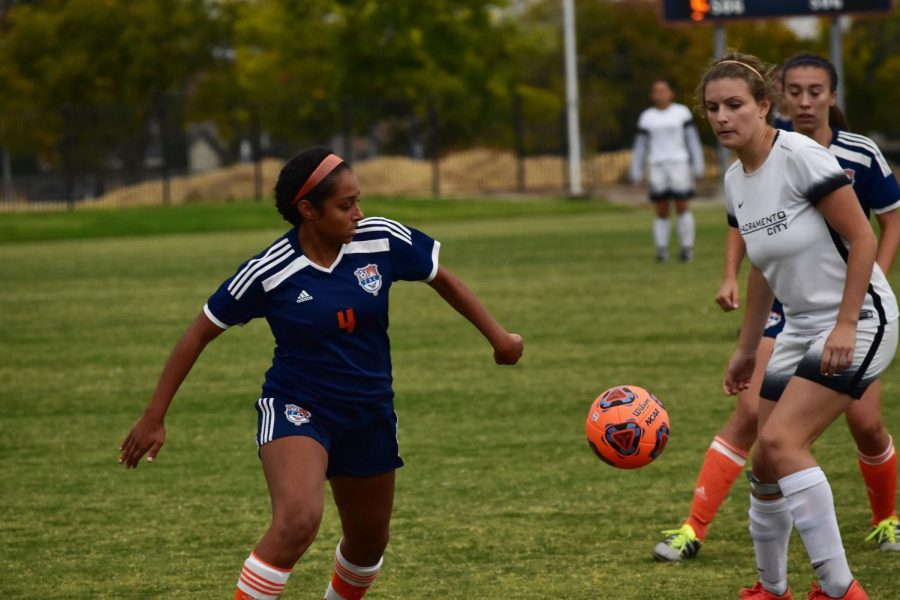 Freshman Jalen Campbell supports the Hawks in their blowout victory over Sacramento City on Nov. 3.

Coming off six consecutive losses, the women’s soccer team had a great comeback, dominating the Sacramento City College Panthers on Nov. 3. The Hawks had complete control of the match, leading to a 6-0 victory.

Within the first 15 minutes of the match, the Hawks were already showing complete control of the ball. Within the next five minutes Sophomore Defense Brianna Heilman rocketed in a beautiful goal for the first goal of the home game, giving the Hawks a 1-0 lead.

“I think we were just thinking, ‘It’s our last home game give it all we got,’” said Heilman.

The Hawks started strong in the second half with a 2-0 lead. Another shot was almost scored immediately, along with amazing passes by the Hawks. Just a couple minutes later though, Sophomore Forward Katrina Vina scored with a beautiful shot, giving the Hawks a 3-0 lead.

Freshman Jalen Campbell gave her thoughts on what helped the most in the Hawks training camp.

“We were able to work on our passing skills and work together on plays,” said Campbell.

The Sac City Panthers tried their best against the CRC Hawks, but the ball would remain in control of the Hawks. Sophomore Defense Yvonne Taylor would then end up making a great shot giving CRC a 4-0 lead. Then, only about 10 minutes later, Freshman Midfielder Analissa Lopez scored, giving CRC a 5-0 lead.

Even though the game was a complete domination against Sac City, Heilman said the Hawks have a lot to work on.

“Definitely communicating more, and we executed a lot of solid passes, so I think we will work on that a lot more,” Heilman said.

The Hawks ended the game on an even stronger note, with Sophomore Defense Taylor Thomas showing dominate control over the ball and scoring in the final minutes, leading to a final 6-0 score for the Hawks.

Hawks Head Coach Cesar Plasencia said he wants to use this win as motivation for the Hawks in their next game.

“We have a game at Sierra next Friday, away and obviously try to win that game. Hopefully we can carry some of that momentum into that match,” said Plasencia.