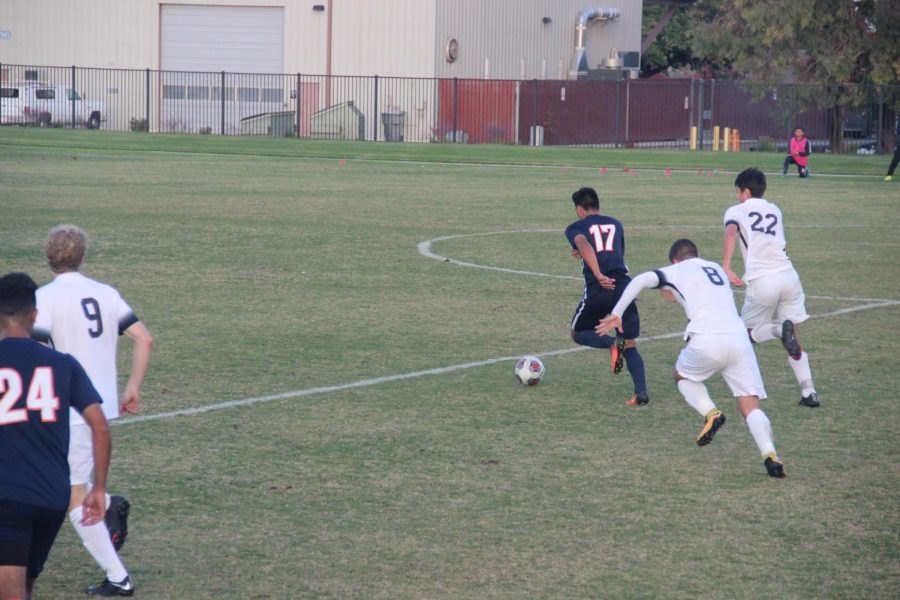 Sophomore midfielder and forward Enzo Leon pushes to create a drive in the Hawks' tie game against Folsom Lake on Nov. 10.

With the last home game of the season for the men’s soccer team, the Hawks had their last chance to fight for a roster spot in the playoffs, but going against the Folsom Lake Falcons ended the game with a 1-1 tie.

The Hawks will have to wait for their playoff results until Tuesday and see if any team lost over the weekend, but if that happens, then their season will continue on the road for playoffs.

“I felt that we outplayed them, we were legitimately the better team today,” Hawks Head Coach Ron Preble said. “I don’t think that they were dangerous until we gave them a couple of free kicks.”

The Hawks were focused and ready to face the number one seed in their division, and as the first half began, the Hawks defended very well, for which their offense flourished in passing, sharing and communicating in the first half.

Hawks freshman goalkeeper Robert Sams prevented the Falcons from scoring, and his skills on blocking and deflecting helped the Hawks to take advantage for having more time of possession of the soccer ball.

It was a scoreless first half, 0-0. The Falcons made more than 10 fouls that led to clumsy mistakes, so the Hawks were able to take control.

“The difference was that we had the ball a little bit more, and we didn’t put away our chances that we had, and could’ve easily had two or three goals in the first half,” sophomore midfielder Efrain Serrano Jr. said.

As the second half began, the Falcons continued to get more fouls and received five yellow cards in the half. The Hawks continued to push for that drive to score the first goal of the game and take the lead.

Within eight minutes, freshman forward Christopher Reveles created his own drive that beat three Falcon players and passed the goalkeeper to take the lead.

After scoring, the Hawks kept creating more drives to score more goals and make this game a blowout, but the Falcons’ defense prevented the Hawks from scoring.

In the final 10 minutes, both teams were taking more shots to score, and the Hawks were on their way to get this win and make this an upset for the number one seed team in their division.

Then, within the two-minute warning, fans from the stands were on their feet as a foul was called on the Hawks which set up a penalty kick for the Falcons. And, just like that, the Falcons scored and tied the game.

The last second strike that the Falcons made devastated the Hawks, but after they scored, the Hawks attempted one more final drive.

Unfortunately for the Hawks, they ran out of time, and even after 45 minutes of great defending where the Hawks outplayed the Falcons, they couldn’t come out with a win.

“Over the amount of the games that we played, we’re playing as a family,” sophomore midfielder and forward Enzo Leon said. “Not just a team, but as a family, and that’s how we played today. I think this is one of the best games we’ve played, and we had the game, but in that last second hurt us.”