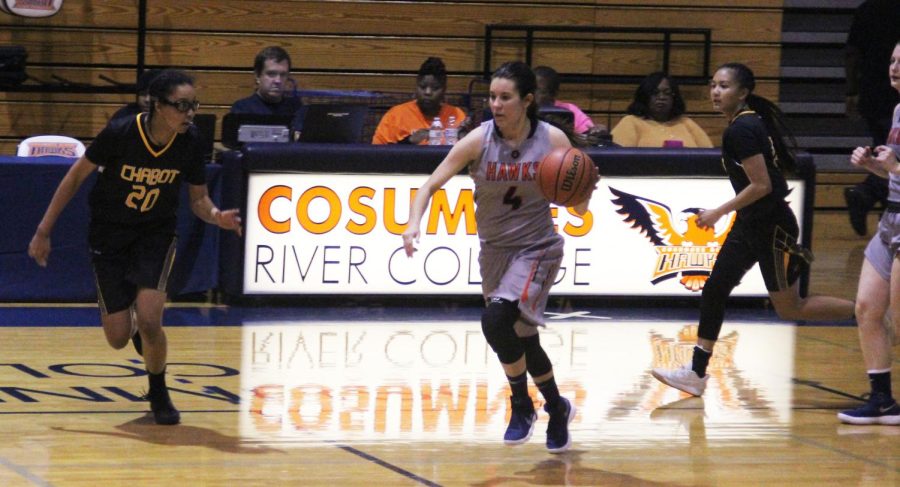 Freshman guard Brookelyn Larkin drives down the court in the Hawks' loss to the Chabot Gladiators on Tuesday.

The women’s basketball team hosted its last home game of the year before going on the road, and faced off against the Chabot Gladiators. The Hawks took a tough loss on Tuesday in a 84-55 contest.

Striving for their first win, and having a fresh new team, the Hawks had a good start in the first quarter. The players were in sync and putting the pressure on the Gladiators that would force them to turnover the ball.

“The main thing is getting these girls rest, and we’re going through some lineup changes, and we don’t have our full roster,” Hawks Assistant Coach Jennifer Jacobs said. “My main priority for these girls is just getting them as much rest as possible.”

After losing to West Hills College Lemoore in overtime by 62-59 on Monday, the Hawks are still battling to get their first win of the season.

As the game began, the Hawks were putting the pressure on the Gladiators which forced them to turnover the ball more than five times. Despite this, the Hawks scored 13 points and the Gladiators scored 25 points in the first quarter.

“Our defense wasn’t terrible, but conditioning wise, we’ve got to get in shape and getting as much rest as possible,” Jacobs said.

“We still want to win, but we’re not going to give up. It’s just the beginning,” freshman forward Micaela Dagler said.

While the Hawks had to play catch-up for most of the game, they made trips to the free-throw line, attempting 20 free throws on the night.

As the game went on, the Hawks made the Gladiators turnover the ball 30 times, continuing to be defensive and put the pressure on the Gladiators.

“We need to come together more as a team,” Shaner said. “We get frustrated, fast, and anxious when we start picking up the tempo of the game, so I think we need to just slow down and play our game instead of the other team’s game.”

As the second half started, the Gladiators continued to take control of the game. The Hawks kept putting the pressure on them, but the Gladiators answered back by being opened for three-point shots and playing defense on the Hawks.

The Hawks surrendered 84 points on the night. The team ran into issues with rotations and time, and struggled to play transition offense, which left the Gladiators’ shooters open for shooting threes.

“I’m doing my best to try and get this season together before [Head Coach Coral Sage] comes back,” Jacobs said. “It’s been a rough start, but I’m just implementing her philosophy on what she does while she’s gone.”

The Hawks’ next game will come in the two-day tournament hosted by Santa Ana, and after that tournament, they will travel to Fairfield for a three-day tournament.