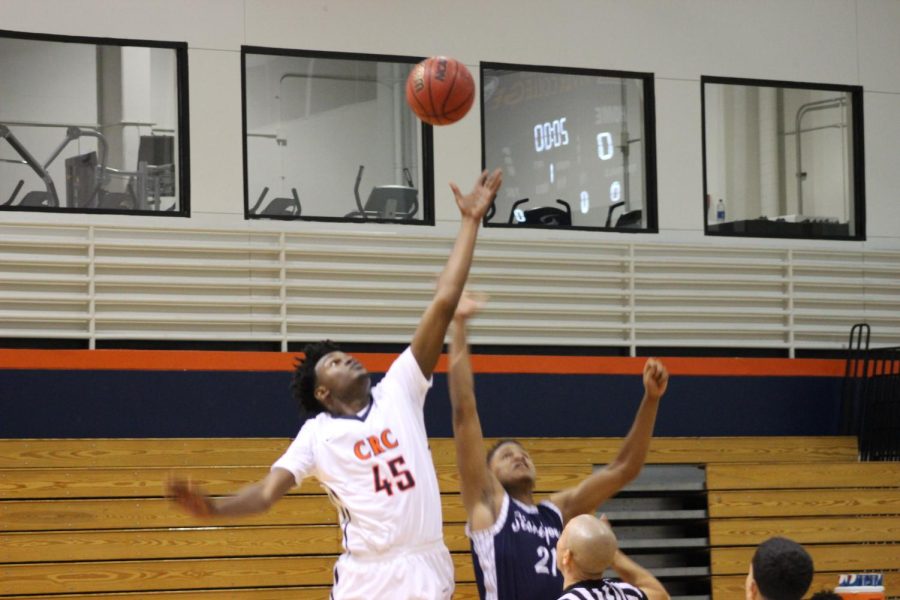 Sophomore forward Everton Maxwell participates in the tip off to start the Hawks' tournament run on Nov. 30.

Cosumnes River College provided its gym to host the 39th Annual James Clark Classic tournament, and the men’s basketball team hosted its first home game of the season against the Siskiyous Eagles on Nov. 30.

The tournament was a three-day event, which meant that the Hawks played for the next three days until Dec. 2.

The teams that were in the tournament were Chabot, CRC, Feather River, Las Positas, Merced, Napa Valley, Sacramento City and College of the Siskiyous who battled for the championship.

The Hawks returned home after being on the road for the last four weeks, making this a homecoming for the team. The team was prepared to start off focused and determined to get the win, said CRC head coach Jonathan James.

“Nobody quits in college basketball, you have to make them quit, and got to continue to keep fighting no matter what their record is,” James said.

The Hawks and Siskiyous were the second to last game of the evening. The starting lineup for the Hawks was guard Onkar Sidhu, guard/forward James Gill, guard Jordan Roberson, guard De’Rajaee Austin and forward Everton Maxwell.

Coming into this game, the Hawks were 2-3, and in their last game, they defeated the Skyline Trojans 69-51. Gill scored 19 points and averaged 18 rebounds as the team progressed to get their win.

In the first half, the Hawks began to attack first to take the lead, and Roberson scored 12 points, one steal and rebound, and two assists, for which he was 2-3 for three-point shooting and 2-5 for field goals.

“We had a slow start, but I felt that we worked together as a team and got the job done,and took care of the W [win],” Roberson said. We got to keep pushing, one game at a time, and can’t get too happy about that W.”

Unfortunately, he suffered a bruised left ankle for which he had to miss time playing and recover. But it was only until the end of the first half, and he was available to play again in the second.

The Eagles were 0-6 coming into this game but “They were playing like they were a 6-0 team,” James said.

“We needed to keep pushing and control the ball more,” James said.

By halftime, the score was 35-32 the Hawks lead. The Hawks were playing smooth and developing to force turnovers, but what kept them in the game was 11 trips to the free throw line.

Within the first three minutes of the second half, the Eagles scored five points to tie the game at 37-37, and the Hawks were unable score.

The clock was going, and more fouls by the Hawks gave the Eagles chances to score, but in the final 12 minutes, James reserved some of his starters to put in his reservers.

Mikayelyan scored nine points and was 3-5 from three-point shooting.

“It feels really good to just go in, and kind of do your role, and the two things that they always tell me is ‘stay in rhythm’ and ‘stay in balance, and shoot with confidence,’” Mikayelyan said.

As the game went on, Buggs, Ohiri, Potts and Mikayelyan scored a total of 32 points off the bench.

“We played together as a team, and we communicate to we can get dubs,” Buggs said.

The Hawks took over the game as they were controlling the time possession of the ball, making 23 trips to the field goal line.

In the end, the Hawks took game one defeating the Eagles 78-68 to progress in the tournament.

“You’ve got to approach every game as the other team as a threat. I think that tonight we didn’t take them as a threat,” James said. “We kind of took the win for granted, but the biggest thing is you have to take everybody as a potential threat because they are, and that’s college basketball.”