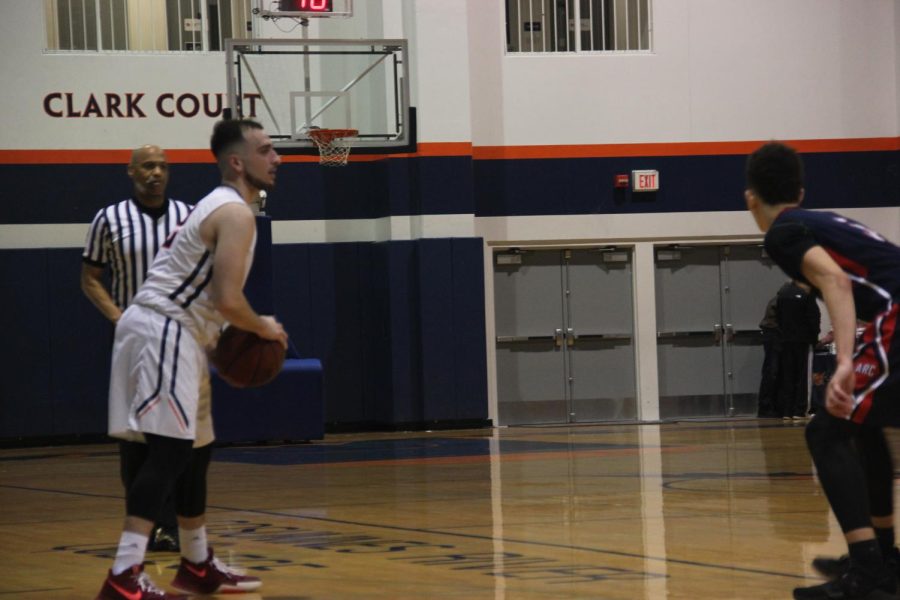 Guard Gor Mikayelyan looking for his shot against ARC

The men’s basketball team hosted another conference game against the American River College on Jan. 19, but they lost 71-63 after a comeback attempt.

ARC is ranked eighth right behind Cosumnes River with their record 5-13, and were tied with the Hawks 6-13.

“We just gotta get guys on the same page, and certain individuals aren’t preparing for games well and that hurts us,” Head Coach Jonathan James said. “It’s all about defense, getting defensive stops, and tonight we got crucial defensive stops, but we come back and [we] get bad shots.”

As the first half began, it was a slow start for both teams. They couldn’t make their shots count until guard De’Rajaee Austin ended the two-minute delay and scored the first points.

The Beavers were building their momentum up by rebounding the missed shots from the Hawks and taking a 16-10 lead, forcing the Hawks to take their first time out.

Guard Gor Miakyelyan, with his first start of the season, had a hot start by scoring 17 points to keep the Hawks in the game.

“My main focus was basically to keep high intensity, high energy, and just come out with full force and don’t back down or nothing,” Miakyelyan said.

With a 1:15 left in the first half, the score was 23-29, and the Hawks were within range to tie or take the lead before halftime.

The Beavers rebounded the ball and drove down the court and with time to waste, they scored four more points to add on to their lead, making it 23-33.

At halftime, it was a 10-point game, and the Hawks have kept struggling to keep their momentum going into the second half, but they came out hot to star.

The Hawks opened up an 8-2 run making it 31-35, forcing the Beavers to take a timeout with just two minutes into the second half.

“After that 8-2 run, we didn’t execute or go the line after that to get easy buckets, [or] stopping the clock which helps,” Maxwell said.

Throughout the half, the Hawks were climbing their way up to make a comeback against the Beavers. With five minutes left in the second half, the score was 50-59.

“We always start off with the first half good [then] second half we start off good, but when they get on runs it kind of shut us down,” Mikayelyan said.

Forward Everton Maxwell and guards De’Rajaee Austin and Inkar Sidhu all scored a total of 36 points to keep up with the Beavers.

With three minutes left, it was now or never for the Hawks. They were making their shots count, and the score was 60-68.

As time was counting down, there was a sign of a huge comeback for the Hawks, and the Beavers couldn’t stop the Hawks on their run and they were within range of tying up the score.

With one minute left, it was an eight-point game, and the Hawks couldn’t get any open shots to take any three-pointers.

As the Hawks received the ball, there wasn’t that much time left, so they shot their final three-pointer and made the final score 63-71.

“If you look at it that way, you can say that it’s a rivalry because of the competitions is always going to be there every night,” James said.