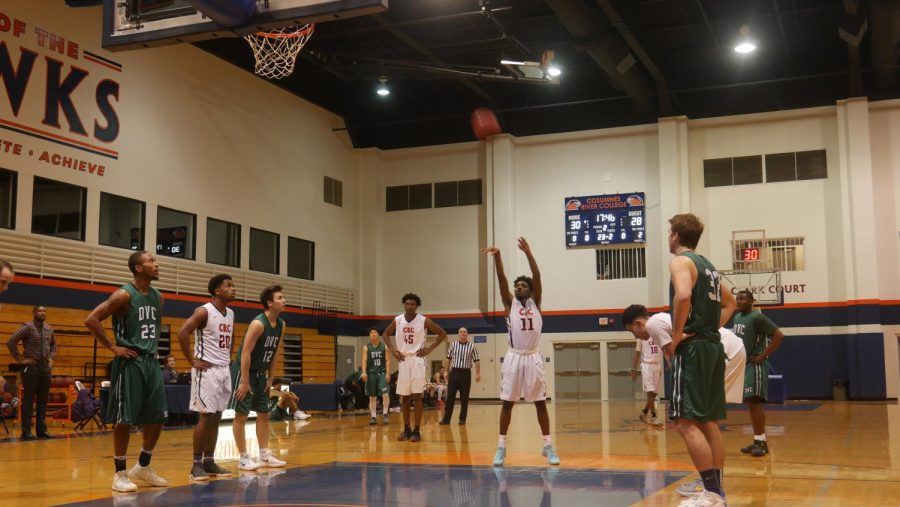 “It was a lucky shot to be honest,” Hawks Guard Onkar Sidhu said. “He just throws it up and next thing you know it goes in.”

In this Big 8 matchup, Hawks faced the Vikings with great intensity.

Defensively, the Hawks were able to zone out the visiting team and forced them to shoot perimeter shots.

However, Diablo Valley seemed to relish in the outer perimeter as the majority of their field goals were from behind the line.

Out of their 46 shots, 30 attempts were from behind the arc and were able to make 43 percent of them.

Despite this, the Hawks were able to keep up with a healthy mix of perimeter shots and shots from the paint.

Cosumnes was also more efficient from the three-point-line, making eight out of their 18 attempts.

Besides forcing the Vikings to take more perimeter threes, the Hawks were also able to put the pressure on them by forcing turnovers, especially during transitions.

They were able to steal the ball 15 times during that night as opposed to the Viking’s four.

“We were down by 10 and we were able to take the lead,” said Hawks Point Guard Jalen Valverde. “We never gave up.”

During the fourth quarter, the Hawks seemed to have the game in the bag, but the Vikings were able to make a prayer three go in at the last minute.

The Hawks did the best they could during the last seconds of the game. You want the opponent to take those kind of shots.

The main reason of the Hawks’ defeat was due to a poor shooting percentage in the free throw line.

Looking at the box score, the Hawks made seven of their 12 shots from the charity stripe. In comparison, Diablo Valley made all six of their free throw attempts.

If the Hawks were able to convert all of their points from the line, they would have negated the Hail Mary shot that cost them the game.

“I told my guys I’m proud of them,” Hawks Head Coach Jonathan James said. “In my mind, we won that game. We played well, we executed, and we knew our personnel. When a kid makes a shot from 55 feet away without looking at the basket, you have to live with it.”