Hawks are unable to get the win on sophomore night 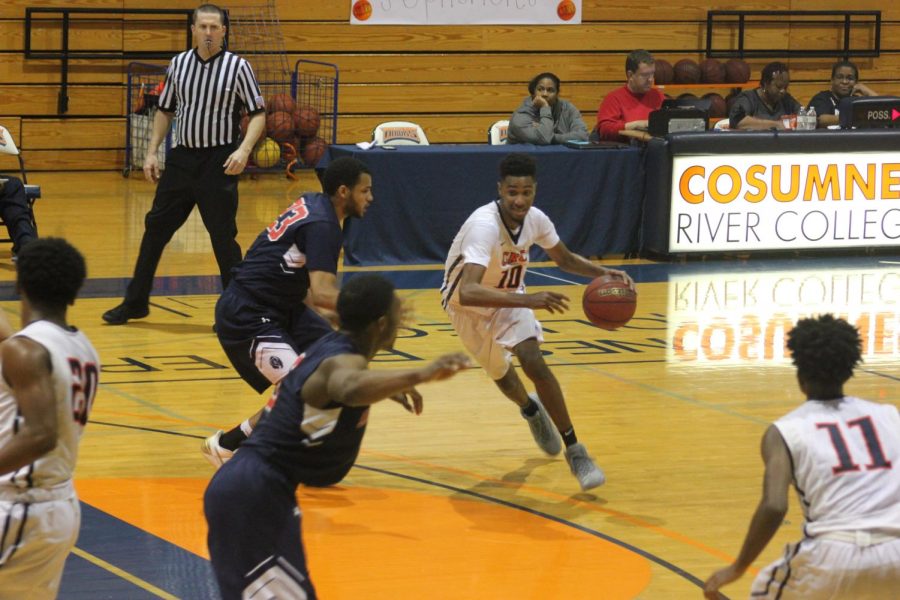 CRC sophomore guard Jordan Roberson passes through freshman Malcom Jenkins to attack the rim and score in the Big 8 matchup on Feb.9

The men’s basketball team ended their last home game of the season on Feb. 9 with a tough loss against Santa Rosa Junior College with the final score 74-67.

It was sophomore night for the team, and four of their players guards: Jordan Roberson, De’ Rajaee Austin, Gor Mikayelyan and forward Everton Maxwell were recognized.

Roberson said that Chavez was a “hell of a player.”

“I tip my hat off to him tonight,” Roberson said. “He came up big for them, and I know he is gonna be a great asset going off.”

In the beginning of the first half, the Cubs took a 20-10 lead in the first five minutes. James had to take three timeouts to fix the mistakes of turning over the ball and not executing strong.

After that, the Hawks played aggressively against the Cubs by scoring 10 unanswered points to tie the game in four minutes.

The Hawks built their momentum.With the return of forward Paul Ohiri, another big player, his renewed vigor performance helped the team to rebound and defend well.

“He helped us out tremendously with rebounding,” James said. “But just because he’s back you can’t rely solely on him.”

With two minutes left in the first half, the score was 28-29.The Hawks inbounded the ball and gave it to Ohiri.

He drove down half-court to attack the paint to get the foul and go to the freethrow line to shoot two shots.

The Hawks take the lead 30-29, but the Cubs got their last points of the first half by making a layup, taking the lead again 31-30.

“Stopping 33 was kind of hard for us,” Mikayelyan said. “Every time he had the ball they isolated, and nobody else really seemed to be a factor.”

The Hawks were trying to keep their momentum up going into the second half. It was a struggle in the past few games, but that did not mean they were going to allow anyone to run them over on home court.

As the game went on, the Hawks were missing their shots and not attacking the perimeter. That allowed the Cubs to score and take the lead 67-58.

There was three minutes left on the clock, but that was enough for the Hawks to make a comeback.

The Cubs prevented that from happening, however, extending their lead and making the score 71-65.

Chavez had to be double teamed, but that didn’t distract or mess up the game plan for the Hawks to come back in this game.

With one minute left, the Hawks stole an inbound pass to Chavez to get the layup, but that was their last points to score, making the final 74-67.

“This is Big 8,” James said. “And as any night as you can see any team can lose and win, when it gets to conference play you got to be ready.”