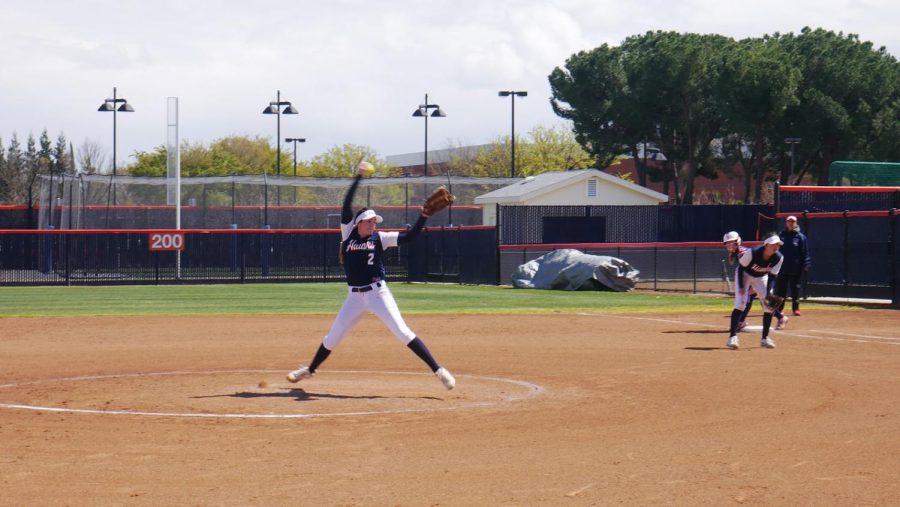 The Bear Cubs couldn’t split the double-header as the Hawks dominated the first game and came back after being down two runs.

The Bear Cubs could not get a base hit. In many cases, their hits led to either a ground out or a fly ball which the Hawks took full advantage of, getting base hits and earning their runs.

“We played great defense,” Hawks’ Head Coach Kristy Schroeder said. “I thought Ashleigh threw very well, he hit her spots and we made some nice plays to help her out too.”

The Hawks even got a grand slam in the fourth inning which Schroeder said “took the wind out of the Bear Cubs’ sails.”

“When I saw it was over, I just started running and I saw everyone at home,” Hawks’ First Base Ashlee Kaiser said. “It was exciting.”

This was Kaiser’s first home run playing for the Hawks and made the Bear Cubs’ situation into a chasm they cannot climb out of. Bear Cubs lost the first game with a score of 7-0.

In the second game, the Hawks tried to carry their momentum over. However, the Bear Cubs were prepared and were able to hit some ground balls to get runs. Their offensive efforts resulted in a 2-1 lead in the first inning.

Bear Cubs’ Pitcher Halli Short was the focal point of their defense. Short pitched seven strikeouts throughout the entire game, which helped hold the Hawks for a while.

However, the Hawks were determined to sweep the Bear Cubs aside and went on a run in the fifth. Hawks’ Second Base Veronica Smith batted in three runs, which was pivotal for their victory.

“The best part about this team is that we pick each other up when we’re down,” Hawks Pitcher Gabby Montaie said.
Montaie pitched for the Hawks in the second game, replacing Berg.

At this point, the Bear Cubs were down two. Despite the player’s efforts in the sixth inning, the Bear Cubs’ position became dire as they couldn’t get any decent base hit.

The game ended 4-3 with the Hawks over the Bear Cubs.