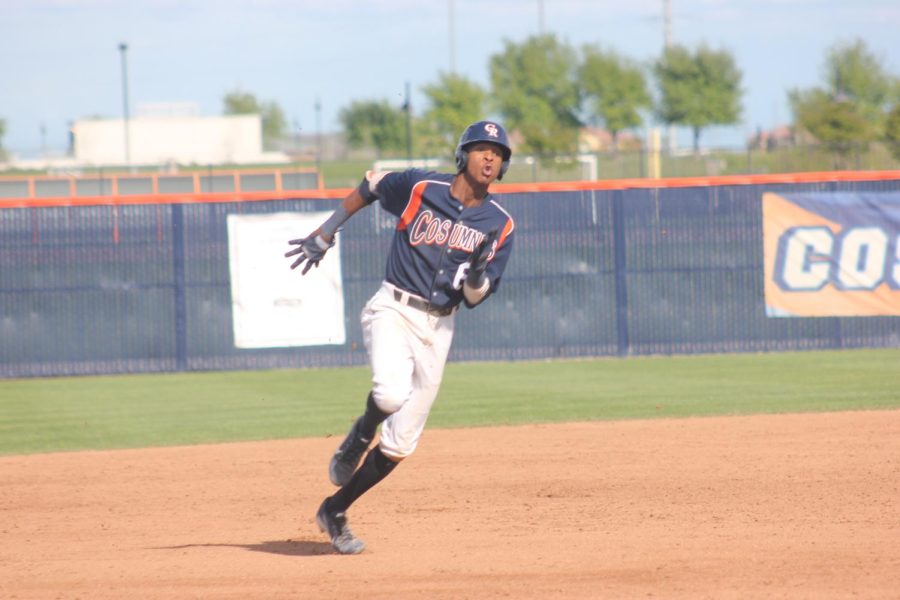 At the bottom of the eighth inning, outfielder Burle Dixon runs to third base. After hitting a triple in mid field for 400 feet on April 12.

With less than four games in the 2018 season, the Hawks are still fighting for a playoff spot in the Big 8 conference.

The Hawks battled the Mustangs of San Joaquin Delta in a three-game series. It was their second matchup in the past two days.

“San Joaquin is a really good team,” Head Coach Don Mico said. “They’re ranked number one in the state, so it’s a good win for this young team.”

San Joaquin Delta is the number one team in the division with a record of 27-5 coming into this matchup.

The Hawks took a 1-0 lead in the first inning by utility Damien Chavez advancing to score the first point of the game with a single from first base/left-handed pitcher Joey Pankratz.

Hawks pitcher Josh Caldwell had himself a game by shutting down the Mustangs early before the Hawks took the lead.

“I feel like I played pretty well,” Caldwell said. “I did my job, but it was good to get our batters to hit early and striking first, so that was our gameplan.”

The Hawks scored two more points in the third inning, with the first score by outfielder Dean Lucas advancing to home by a single from outfielder Burle Dixon. The second, by Dixon on third and the Mustangs made an error to allow Dixon to score.

The score was 3-0, the Hawks wanted to attack early and make the Mustangs travel late.

“It doesn’t matter if they’re the number one team,” Caldwell said. “We’re here to play our game, not theirs.”

In the fourth inning, the Mustangs got on the board, with first baseman Jake Cruce on third, and outfielder Jimmy McClenaghan hit a single to allow Cruce to score their first point.
The score was 3-1.

The Hawks had a changeup with their bullpen when Mico decided to go with closing pitcher Daniel Vitoria in the sixth inning.

Caldwell’s last pitch of the game ended with a homerun for 320 feet in leftfield by first baseman/utility Anthony Lucchetti. Vitoria came in after that homerun play.

The score was 2-3, a one-point game and the Mustangs were still fighting back to either tie or take the lead in this matchup.

“You always got to play better defense against the top team,” Dixon said.”We had the adrenaline on our side, so we needed to get them out quickly on bat.”

With three innings left, the Hawks were holding onto this lead, and they had to be aggressive on the field to keep the Mustangs from scoring.

In the eighth inning, the Mustangs were hitting from Vitoria’s pitches, but the Hawks’ defense avoided them to get on base. To end the inning, utility Aaron Pierce dived to catch the ball.

Bottom of the eighth inning, the Hawks scored another point, with Dixon on third and Chavez on first, Pancratz hits a single leftfield and Dixon scores. The score was 4-2. The Mustangs ended the inning with a strikeout.

“It felt good, but it was better to score,” Dixon said. “I knew once Pancratz hit the ball I can score quick.”

In the ninth inning, the Mustangs were up to bat and Vitoria had his chance to end the game.

The first pitch, by infielder Anthony Galindo hit for 400 feet midfield, but Dixon, with the save, caught the ball. San Joaquin got two Mustangs on base, and with two outs, Vitoria pitched the ball and Pierce caught the ball between his legs and that that was the game.

The final score was 4-2, making the Hawks get even with the Mustangs.

The final matchup of the season will be over at Stockton at 2:30 on Friday 13.

“They competed through the whole game,” Mico said. “That’s all I could ever ask of our guys.”