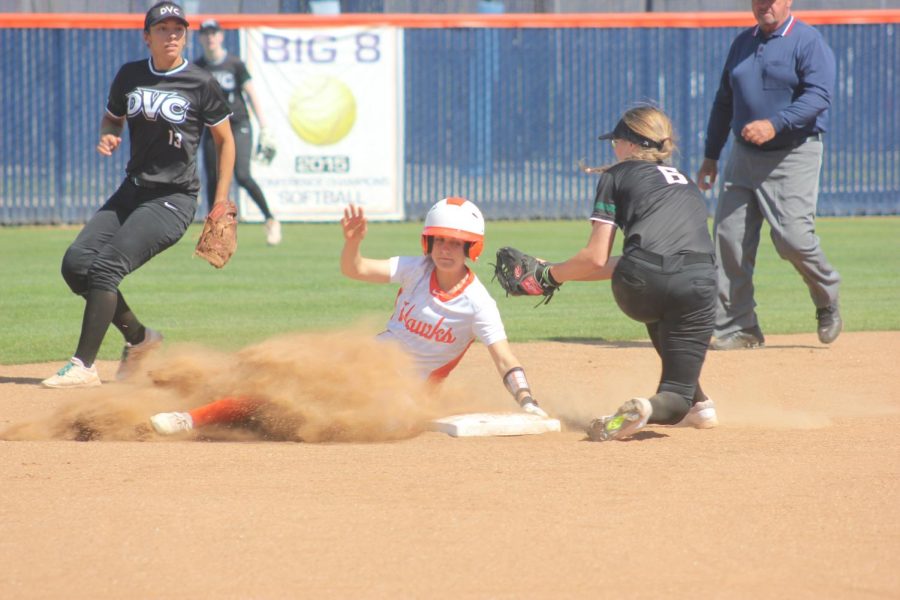 Third baseman Taelor Ford slides to second base in the bottom of the fourth inning, after a single from first baseman/middle infielder Ashlee Kaiser on Tuesday.

The Hawks softball ended their last home game of the 2018 season on Tuesday in a shutout win against the Vikings of Diablo Valley College with the final score 3-0.

Families, friends and fellow athletes from the volleyball team all came to support their team.

The last time the Hawks faced the Vikings was on March 28 at Diablo Valley in a doubleheader, but they lost both games, so the Hawks were ready for them this time.

“Gabby threw a nice game against them,” Head Coach Kristy Schroeder said. “We played some good defense as well, and their pitcher was tough, but we capitalize some of their errors that they made on the field.”

Hawks’ pitcher/first baseman Gabrielle Montaie played through all seven innings, and her expectations from the Vikings was to hit the ball early in the game, but she prevented them with her pitching defense.

Montaie’s performance started off strong in the first inning being scoreless.

“Not to sound too cocky, but I was confident out there and making sure that all of my pitches were working,” Montaie said. “So today was actually a pretty good game.”

It was a scoreless game, and both teams were battling back.

Montaie wasn’t the only pitcher that prevented the Vikings from scoring. Vikings pitcher Sita Manoa was playing aggressive to strikeout the Hawks while at bat.

“We faced their pitcher before and knowing that we lost last time to her,” Rivera said. “So, switching that mentality and letting yourself know that we can beat her.”

Throughout the game, the Hawks were at bat 25 times and the Vikings for 26, so all the starters for the Hawks had opportunities to hit the ball.

The Hawks had more hits than the Vikings with a total of eight to four from Diablo Valley.

At the top of the fifth inning, the Vikings were up to bat with two on base. They would have scored the first point in the game, but Ford dove to catch the ball, making it another three and out inning.

Bottom of the fifth inning, the Hawks ended a scoreless streak by scoring two points. The first point was from Flynn by a single from infielder Cassandra Thomas. The second point was from Thomas because of an error that the Vikings pitched to Krueg and Thomas ran to home.

“We came out ready and knowing that we were going to put those hits on them eventually in one of the innings,” Berg said. “We were able to hold them and get the hits when we needed them.”

The next inning the Vikings tried to get on the board, but Montaie struck two of their players out and first baseman Ashlee Kaiser caught a popup ball in midair. That made it a three and out inning again.

The Hawks scored another point in the bottom of the sixth inning by mid infielder Kylee Boykin from a bundt single from Berg.

Diablo Valley tried to build momentum to get on the board, but the Hawks’ defense prevented them from scoring.

In the seventh and final inning, the Vikings were up to bat, and Montaie can end this game by getting them out. She did that, striking out second baseman Madeline Cervantes.

The final score was 3-0 a shutout win, and it was a moment that the sopohmores can celebrate with their team for the last home game.

“One game at a time,” Schroeder said. “You’re always thinking about post season in the back of your mind, but we got to focus our next matchup.”