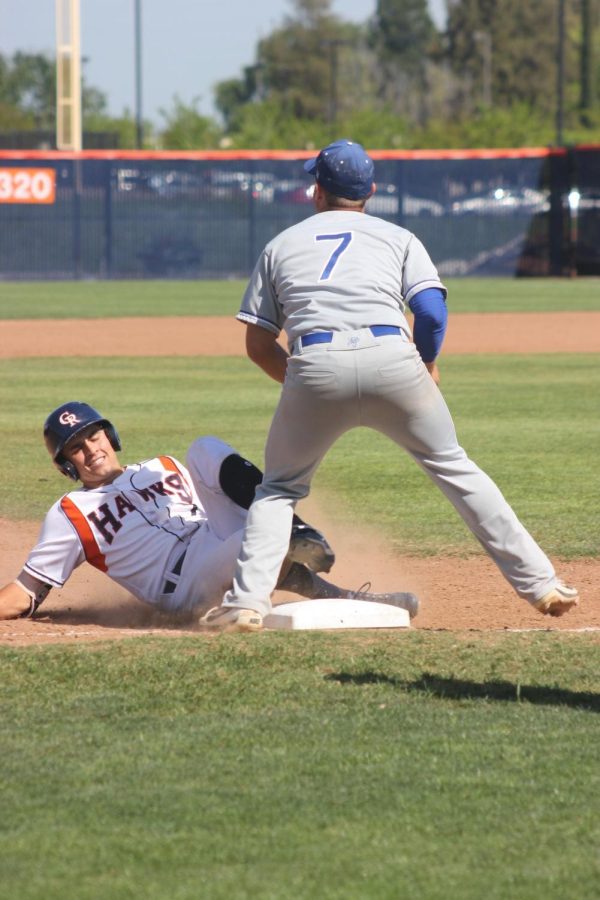 Infielder Alex Crouch slides to third base after hitting a triple for 360 ft into midfield. This play allowed utility Greg Creamer and first baseman/left hand pitcher Joey Pankratz to score on a double RBI, and the score was 5-0 in the bottom of the third inning on Tuesday.

With less than two games left in the season, the Hawks faced another Big 8 conference team in a three game series against the Pirates of Modesto and scored 14 runs in a shutout win on Tuesday.

The Hawks are still looking forward to get a spot in the playoffs, they need to win two out of three in this series.

“Sweep, we’re gonna win two and I know we are a good team,” pitcher Josh Congress said. “Hopefully we can make a run to playoffs.”

“We’re coming towards the end of the season and they know that our backs are against the wall,” Head Coach Don Mico said. “They basically got to win these games.”

Congress had himself a game by striking out 10 and only allowing two hits.

“I think I did good, but I just need to work on not walking people,” Congress said. “Especially on hot day like today, tried to get them in [the dugout] quicker.”

The Hawks took a 2-0 lead in the bottom of the second inning when infielder Alex crouch advanced to score the first run of the game on a wild pitch by Pirates pitcher Brandon Peterson.

The Hawks were building their momentum up and got on the scoreboard first.

The Hawks scored three more runs in the bottom of the third inning when outfielder Jared Alameida advanced to score the first run when first baseman/left hand pitcher Joey Pancratz hits a single. The other two runs came from utility Greg Creamer and Pancratz scored on a triple by infielder Alex Crouch.

“We hit well and we never folded, put up good A.B.’s all the way through nine [innings],” Pancratz said.

In the bottom of the fourth inning, the Hawks scored three more runs. The first two runs were by outfielder Burle Dixon and JD Mico. They were brought in by utility Aaron Pierce who hit a single.

The score was 8-0 and the Pirates had no answer.

Congress faced a tough matchup in the fifth inning, when the bases were loaded with only one out.. He got out of the jam by inducing a fly ball and striking out a batter to end the threat.

“I just had to hunkered down and be the guy I am, and I tried to get them into a double play, but luckily they struckout,” Congress said.Congress played until the end of the sixth inning.

“Congress came out today and did his job, so that gets the batters going for us on offense,” Pancratz said.

“Josh has been good all season, we’re trying to make sure we can win these next few games and that’s the important part,” Mico said.

In the bottom of the seventh inning the Hawks scored three more runs to extend their lead. With the bases loaded, Dixon coaxed a walk from the Pirates pitcher allowing Aubrey to score from third. The second runs came when outfielder Dean Lucas scored on a sacrifice flyball in mid left field by Alameida. The third run was from JD Mico when Pierce hit a single up the middle with the bases loaded.

In the bottom of the eighth inning, the Hawks scored their final three runs of the game. With the bases loaded Crouch scored on a single to right field by infielder Clay Duval. The next two runs were scored by Lucas and utility/pitcher John Treat on a single to center field by Dixon..

In the ninth inning, the Pirates were up to bat and Hawks pitcher Timmy Tarrant had his chance to end this game.

The first pitch was a pop fly ball to get the first out and Tarrant struck out the next two batters to end the inning and that made it a final of 14-0.

The Hawks took game one, and game two will be at Modesto on Thursday and game three will be at home on Friday.

“We got to make sure that we’re ready for anything that happens on Thursday, hopefully we can compete from there,” Mico said.