Playoffs up in the air despite the win 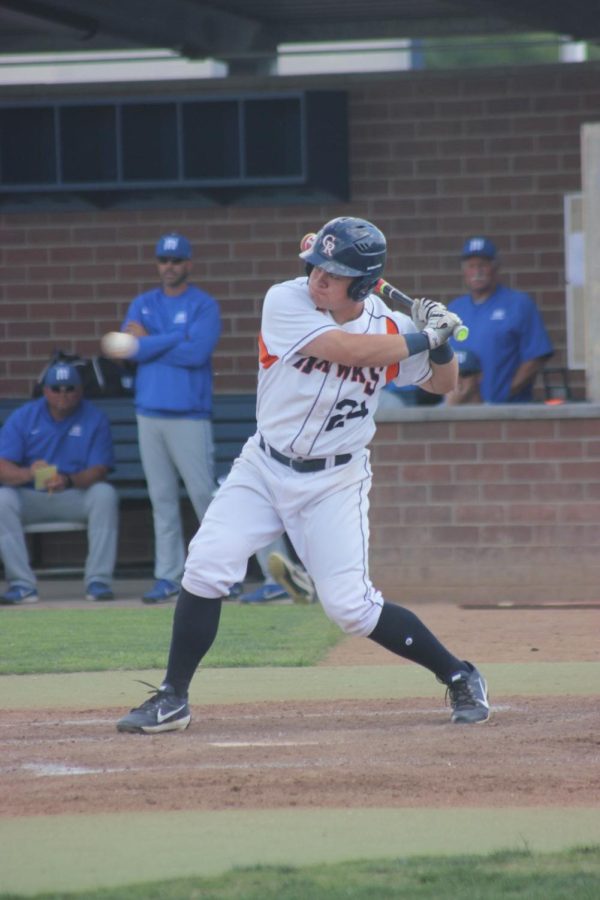 Sophomore first-baseman Joey Pankratz at bat against the Pirates of Modesto College in the bottom of the fifth inning at home on April 27.

With the last home game of the season for the baseball team, the Hawks were optimistic that they would have a chance for a playoff spot after a series-winning victory against the Pirates of Modesto. The final score was 4-1.

If any team loses, then the Hawks will continue on the road to the playoffs before coming back home to potentially host a playoff game.

“We’re young with 19 freshmen and seven sophomores,” Assistant Coach Michael Hacker said. “We have a chance to make it to the playoffs.”

After playing in Modesto on March 26 and playing back-to-back games, the Hawks had little time to prepare, but they were ready to take care of business.

“He did a great job, stepped in and just showed how much he cares for this team,” Caldwell said.

The Hawks took a 1-0 lead in the first inning by outfielder Burle Dixon to score the first run from a sacrificed flyball by first baseman Joey Pancratz to steal and slide safe on home base.

In the third inning, the Pirates tied the game 1-1 from infielder Chris Alonzo by a single from outfielder Anthony Arredondo. The Pirates were not going to let the Hawks run them over from the first matchup, where they dominated them 14-0..

The Hawks answered back by taking the lead after outfielder Dean Lucas scored the second run from an error that was thrown to third base..

For the next two innings, neither team could score. Both were playing good defense..

“Staying with each other, being good teammates and getting everything done were the positives,” outfielder Dean Lucas said.

As Mico pulled Caldwell to rest in the dugout for the rest of the game, Congress prepared to close this game.

In the bottom of the sixth inning with the bases loaded, the Hawks scored another point from utility Damien Chavez with a single to left field by Lucas. The bases were loaded again with Dixon up to bat, but was struck out.The score was 3-1.

The Pirates tried to get back into the game, but the Hawks prevented them from scoring.  The Hawks scored their final run from Pancratz by another mistake from the Pirates.

They tried to get a double out with Pancratz and Chavez, but Alonzo missed the catch to easily let Pancratz walk safely to home base.

“They played better than they did in the first game of this series, and they definitely came out by hitting the ball,” Caldwell said.

Congress continued to be a dominant pitcher that he has been all season, and he closed the game by striking out Arredondo.

The final score was 4-1, and the Hawks ended their regular season with a record of 19-21.

As they wait for their upcoming schedule, the Hawks will have to be patient.

If the Hawks swept the Pirates then “we would definitely be in the playoffs,” Hacker said.