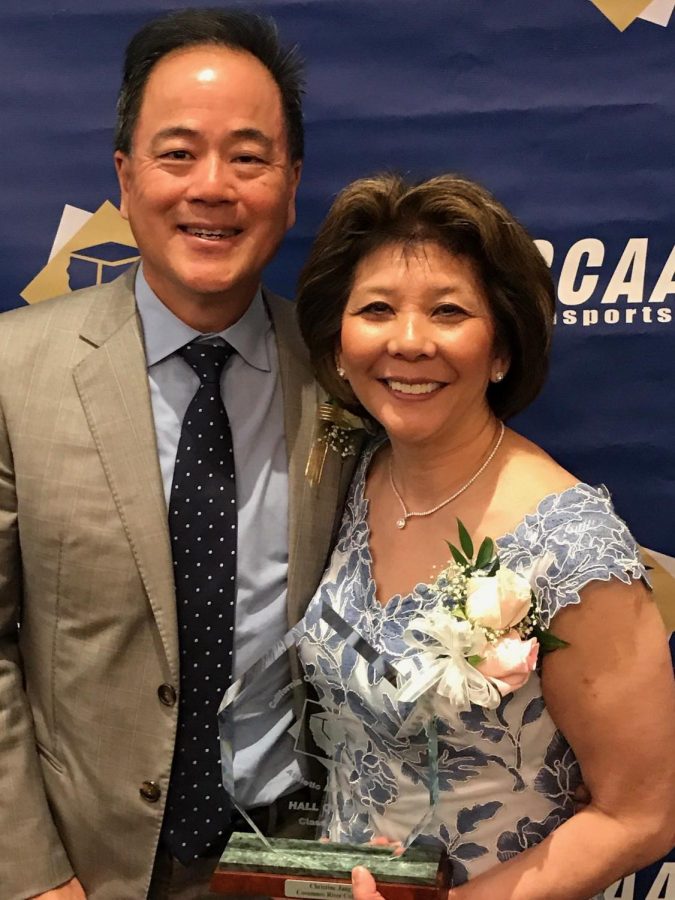 Former CRC gymnast Christine Jang and her husband Marc on March 28 at the 2018 CCCAA Sports Hall of Fame award ceremony.

“She is by far the best athlete we’ve had,” said Assistant Athletic Director Jeanne Calamar.

Calamar said that Jang, who competed as a gymnast in 1977 and 1979, won the title of state champion twice.

“You have to be pretty darn good to do that,” Calamar said, further adding that she was the first and only female athlete to win two state titles.

During her first year as an athlete, Calamar said that she suffered an ankle injury. She further added that Jang had already planned on transferring to a four-year university and would not compete again.

However, after being convinced by her coach Gert Tipton to stay for another year, she returned to the sport and proceeded to win every event she participated in during the Valley Conference Championships.

“Obviously, she was named the ‘Most Valuable Gymnast’ of the conference,” said Calamar said.

Collin Pregliasco, dean of Kinesiology, Health, & Athletics and athletic director, said that she had a successful career as an athlete despite Jang’s history of her sports-related injury.

“You can’t have a better career like she did,” Pregliasco said.

In 1979, Calamar said that Jang was named ‘Gymnast of the Year’ by the Sacramento Hall of Fame.

Pregliasco also said that Jang went to the Cosumnes River College Hall of Fame a few years ago.

“She was a tremendous athlete in terms of all events,” Pregliasco said.

Tipton, who was the former Athletic Director at CRC, said that Jang was an outstanding athlete while she was still a student at the college.

“She did her routines diligently,” Tipton said.

Tipton said that because gymnastics was not a team sport, Jang understood her role as an individual athlete. Despite this, Tipton said that she was encouraging to other gymnasts.

“She was a ray of sunshine,” Tipton said, additionally saying that she was a joy to have in the gym.

Both Calamar and Tipton said that Jang was a very humble athlete.

“She never felt that she was that good,” Tipton said.

Calamar said that being inducted into the CCCAA’s Sports Hall of Fame is one of the greatest accomplishments an athlete from a community college can earn.

Pregliasco also mentioned that Jang is one of the few CRC athletes to be honored by the CCAA.

Pregliasco said that the speech Jang gave during the awards ceremony was a great one.

“Her speech at the Hall of Fame was amazing,” Pregliasco said, later describing how she spoke about overcoming adversity and learning work ethic in athletics.

Pregliasco said that Jang “hit the nail on the head” on what it means to be an athlete during her speech. He further added that she recognized CRC and how the school had pushed he to where she is today.

“She was a dedicated student,” Tipton said, citing her medical career as a result of that dedication.

Pregliasco said that Jang is now the head of the gynecology department at Kaiser Permanente, South Sacramento.