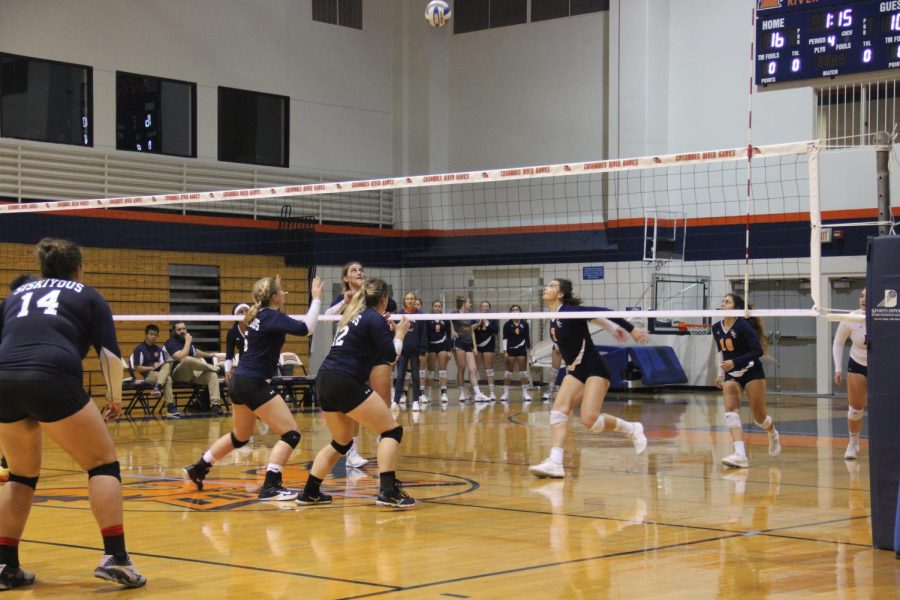 Freshman middle blocker Taryn Oberle sets up for a kill. Oberle is one of seven freshman who bring new talent and promise to the team.

After a 6-4 start to the season, the women’s volleyball team is looking to continue their momentum into conference play and to improve upon their growth from last season.

Last year the team also started the season strong but struggled to compete in conference play ending the year 10-15 but only 3-13 in conference play. Coach Kari Nahlen is confident that this year’s team, with seven incoming freshmen, has the talent to make them very competitive.

“This season we are a lot more athletic than we were last year, which is great,” said Nahlen. “We’ve been in every single match that we’ve played and you can’t ask for more than that.”

The new additions to the team this year have added depth and power, which has players excited about the prospect of a winning season.

“We are a lot more offensive then we were last year,” said Rebekkah McLaughlin, a returning sophomore who leads the offense as a setter. McLaughlin said that she knew right away that the team had a chance to be better than they were last year.

While the team has a lot of new talent, they are learning to to come together on the court to create more consistent play.

“I think we mesh well off the court but I think we need to do better meshing on the court,” said freshman outside hitter Kylie Pires.

Pires attributed some of their early success to the team becoming close with each other and having a good collective attitude before the season started. Players and coaches alike agreed that they have a good foundation to build upon but that there is a need to bring what they practice and preach onto the court on game day.

Oberle and Pires are two of the powerful freshman talent that Nahlen spoke of, who give the team high hopes and a lot of promise going into the season. They are long and athletic with three players standing 5 feet 10 inches or taller and have the ability to overpower many of their opponents. With McGlaughlin leading the offense with her steady and savvy play, it’s the consistency, particularly when it comes to their serve-receive game, that the team will be searching to find as they head into conference play.

“When we are up, that’s when we are really killing other teams but sometimes when we make one mistake we make 10 mistakes,” Nahlen said. “We just need to make sure that we limit our errors and when we do error we need to snap back a little bit quicker.”

The Hawks will look to find that consistency when conference play starts this Friday as they visit Folsom Lake College. If they can gel together and find their stride, they could be looking at the best season for the program in quite some time.