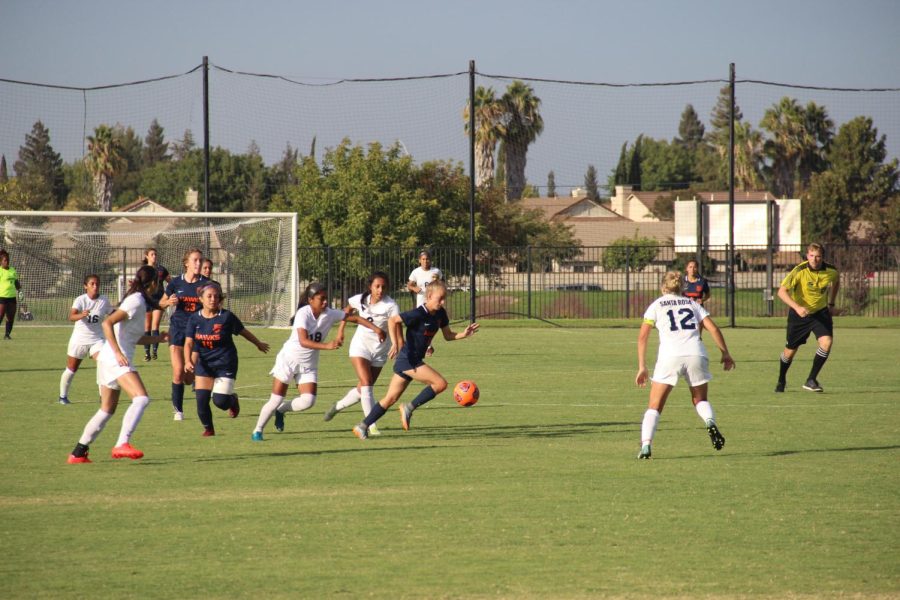 Freshman midfielder Bailey Bradford tried to push the ball upfield all match but the Hawks could not score. The Hawks fell to 1-5-1 in conference play.

The women’s soccer team lost a frustrating game to Santa Rosa Junior College 4-0 on Tuesday, dropping them to 1-5-1 in conference play.

While the score was lopsided, The Hawks controlled the ball for much of the match but were victims of the Bear Cub’s counter attacks that lead to some unlucky scores.

“ Defensively, we did a pretty good job withstanding them,” said Head Coach Erika Anguiano. “It was just kind of an unlucky match for us today.”

In the 27th minute with the ball in front of the net crowed with players for both squads, a pass deflected off a Hawks defender and snuck past keeper Tanayjah Tamano for an own goal.

Right after the start of the second half, a shot by Santa Rosa sophomore midfielder Celeste Barajas was in the hands of Tamano but she was unable to hang on and the ball slipped past her for the Bear Cub’s second goal.

The third goal was a frustrating back breaker for the Hawks. Bear Cub’s freshman forward Kitana Gonzalez took a hard shot that hit the top of the cross bar and bounced straight down of Tamano’s back and into the goal.

“Unfortunately, with soccer, any shots that you take don’t have to be the prettiest,”  Anguiano said. “It can result in a goal.”

Since the Hawks came into the game nursing some key injuries, their plan was to control the pace of the game and to let strong defensive play lead to scoring opportunities, Anguiano said.

Both Anguiano and members of the team said they were pleased with their defensive effort but mistakes and misfortune lead to their loss.

“The way that we are losing are our mental mistakes, our mistakes that we can fix ourselves,” said freshman midfielder Taya Bradford. “There hasn’t been really a goal this whole conference that was like ‘whoa that was a nice goal.’”

Freshman midfielder Bailey Bradford added that while the Hawks lost, they weren’t necessarily overmatched by the Bear Cubs.

“I feel like our mental toughness needs to be there and it’s not,” Bradford said. She added that in a game like today they can get their heads down after a “silly mistake” and have a hard time bouncing back.

By the end of the match, the Hawks had created many opportunities to score, including several set plays with corner kicks and penalty kicks. However, they were unable to capitalize and only mustered three shots on goal.

The team said they know they need to find a way to have their attack upfield lead to more scoring chances.

“It’s either we’re passing too much or dribbling with our head down,” Taya Bradford said. “We just need to keep taking shots; you’re not gonna make it if you don’t take the shot.”