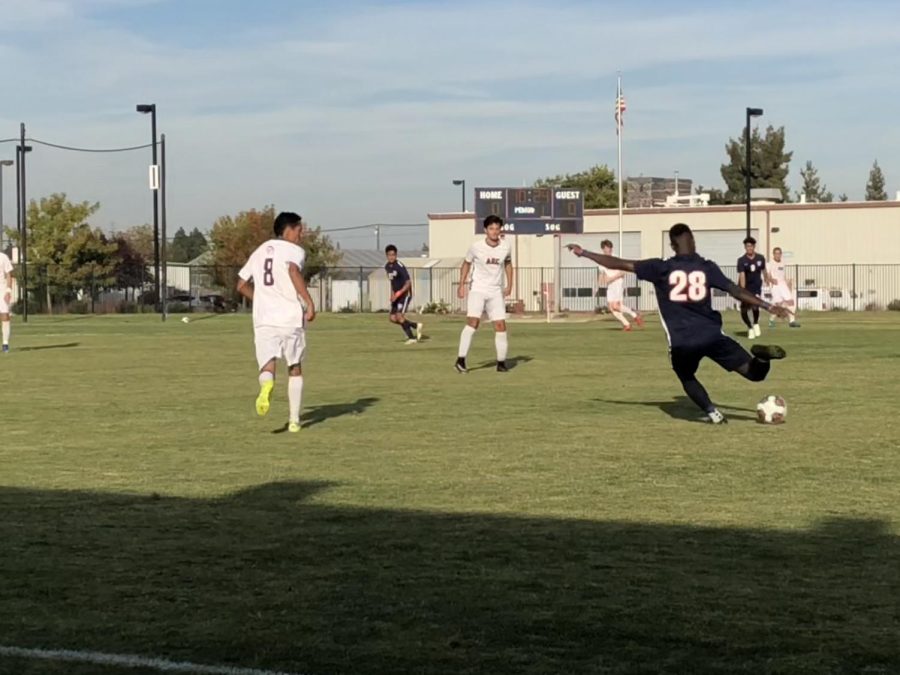 Forward Jubilee “DJ” Emojong passes the ball to the middle during their match against American River College on Friday. Emojong was later ejected for fighting near the end of the Hawks 3-1 loss to the Beavers.

The men’s soccer team suffered a deflating and damaging 3-1 loss to American River College on Friday.

The Hawks dominated the first half in both possession and scoring opportunities but were unable to convert their shots on goal. In the second half, the game became chippy and ugly, ending with three red cards, punches thrown and an ugly loss to a team that didn’t have much to play for.

“We’re not a playoff team so we are just trying to improve and finish on a high note,” said ARC Head Coach Paul Hansen. “This was a good start.”

At the start of the second half the score was 0-0. The Beavers struck first in the first 30 seconds after the break off a beautiful crossing pass near the left corner to the front of the goal where freshman Jonas Babel-Buckner headed it in for a 1-0 lead.

As the Hawks struggled to regain control of the game and find opportunities to score, there began to be more fouls committed by both teams and a lot of complaining to the referees about missed calls or wrong calls.

“Honestly he (the referee) was bad but then this local game has this tradition of this happening,” Hansen said.

What has happening was lots of pulling, tugging, high kicking and tackling on both sides. Besides that, players were repeatedly imploring the referee to call fouls on the other team and commenting that he was losing control of the game.

Finally, the Hawks broke through when sophomore midfielder Lincoln Carvahlo scored on a penalty kick after a questionable call for reckless play in the penalty box.

Less than five minutes later, the Beavers took the lead back when a pass in front of the Hawks’ goal was headed high into the air and when the ball landed in the middle of a crowd of players, sophomore Santiago Moreno kicked it in.

“I think that’s where we started to unravel,” said Head Coach Ron Preble.

When the game ended, the Hawks had picked up three yellow cards and three red cards, which means automatic ejections and suspensions for the next game.

After the game, both Preble and Hawks players were quick to blame the loss on their own lack of composure.

“We didn’t lose because of the ref,” said freshman defenseman Dom Maestretti. “We lost because the style of the game got chaotic and we don’t play well when the game starts getting chaotic.”

Chaos is what broke out toward the end of the game. The Beavers scored a third goal on a breakaway by Dalton Catanzaro with the keeper pulling forward. Afterward he puffed his chest out just a bit, causing freshman forward Jubilee “DJ” Emojong to become incensed and he shoved Catanzaro.

When Catanzaro pushed back, Emojong threw two punches and players poured into the scrum to break things up and keep a brawl from erupting.

“DJ is kind of one of those players who wears his emotions on his sleeves at times,” said Preble. “I think he let that moment get the best of him.”

Emojong’s actions will now be reported to the commissioner who will determine how many games he will be suspended.

“The minimum is one but because of the gravity of what happened he might get more than that,” Preble said.

With two other players getting red cards for multiple violations, the Hawks will be down three players going into their next game on Tuesday against last year’s conference champion Folsom Lake.

“We have to bundle together now because it’s gonna be tough,” Maestretti said.