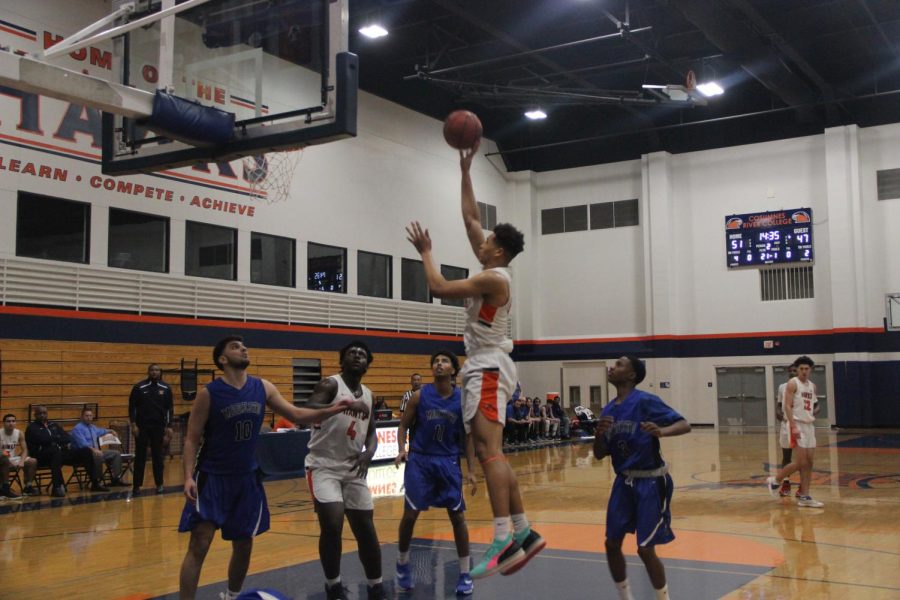 Sophomore forward Drew Buggs goes for a turnaround hook shot after a pump fake on Tuesday against Modesto. Bugg's 17 points helped the Hawks get a much needed win as they fight for a playoff spot.

The men’s basketball team bounced back with a win against Modesto Junior College on Feb. 12.

The Hawks jumped out to a lead early with the help of strong defense and domination scoring around the basket. Freshman guard Marcus Robinson set the tone defensively with three steals and 16 points, most coming by running the floor after forcing a turnover.

“If my teammates pass me the ball, I’m running every time,” said Robinson.

Halfway through the first half, Modesto began to get settled and made a run, but a strong performance off the bench from freshman forward Christian Fong pushed the lead to 15. In nine minutes, Fong went 3 of 4 for eight points and made his first three shots.

“I was feeling it right off the bench,” said Fong. “I felt I needed to step up and I was glad I was able to.”

The win was not without adversity as the Pirates came out in the second half and cut the lead to six.

Hawks Head coach Jonathan James had seen enough and called a timeout to refocus his team.

“A lot of expletives there,” said James about what went on in the timeout. “Guys got a little complacent.”

The Hawks, although never trailing the entire game, never quite got comfortable as the Pirates connected on 50 percent of 3-pointers from three and outscored the Hawks in the second half 45-40.

Sophomore guard Khari Hutt willed the Hawks to victory on the back of a 8-11 for 18-point second half performance.

The Hawks finished the game with a 82-74 victory, but coach James was unhappy with his team’s effort.

“I’m not pleased with the mental effort and focus. Not pleased,” coach James said.

“I felt (the game) was good, we just needed to box out more and play defense,” said Robinson.

Rebounding was clearly a post-game topic after Fong doubled down on their rebounding effort.

“I think we did well defensively, but we gave up 17 rebounds,” Fong said. “To win next couple games we need to clean that up.”

The next two games are important for the Hawks who are 9-5 in conference and are currently a half game behind second place Santa Rosa Junior College.