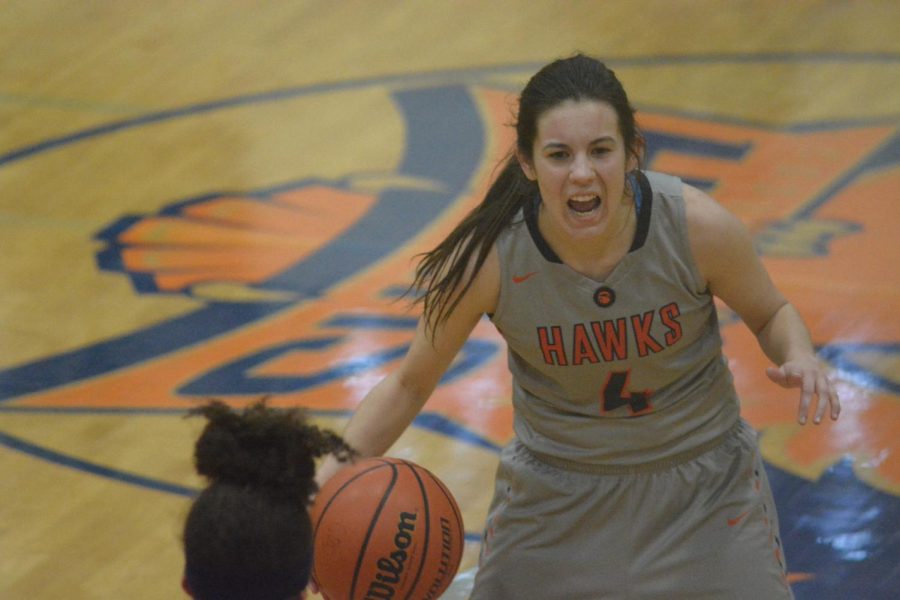 Brookelyn Larkin (above) led her team in almost every major offensive category, including points per game (19.8) and assists (97). She helped the Hawks improve drastically over last season, increasing their win total by eight.

Since joining the women’s basketball team, a student athlete has racked up over a thousand points as a point guard.

Brookelyn Larkin, a sophomore point guard, has been on the women’s team for the past two years and has built up quite a reputation on the team despite her quiet exterior.

“She’s just a different kind of player that you don’t normally see,” Head Coach Coral Sage said. “We kind of talk about it is as being a Haley’s comet.”

Sage said Larkin’s ability to produce offensively and defensively is “rare” to find in a player.

“She’s very unorthodox in the way she plays,” Sage said. “For Brookelyn, she can just play a full 40-minute game and she’s just gonna give you the same effort from the very beginning to the very end.”

Larkin said her interest in basketball started in sixth grade, when her friend wanted to try out for their school’s basketball team but didn’t want to be the only one cut. Instead, Larkin made the team and said she has been playing basketball ever since.

“I thought it was more challenging than other sports,” Larkin said.

Sage said Larkin leads by example, saying that she simply shows up, does what she’s supposed to do and then leaves. Despite her quiet personality, she said it doesn’t hinder Larkin’s performance at all.

“It probably made it harder for my teammates,” Larkin said. “Basketball requires a lot of communication.”

Larkin said her motivation as a college athlete comes from her desire to do better for her teammates.

Freshman forward Kiki Jones said she does a lot of “crazy moves” that makes it hard for her to guard.

“She’s just really fun to watch,” Sage said. “I feel like we kind of got to a point where midway through the season, we just sort of sat back and started to enjoy watching her play and doing the amazing things she was doing.”

Sage said the point guard has scored 1,008 points in regular-season games within the past two years. Since the Hawks did not make it to the play-offs this year, she said they’re not counting the points she could have scored in those games.

“She really did an amazing thing in a compact amount of time,” Sage said.

Sage said she does her job in the classroom, too, further saying she has a 3.8 GPA.