Hawks rally for eight runs late but fall to Wolverines 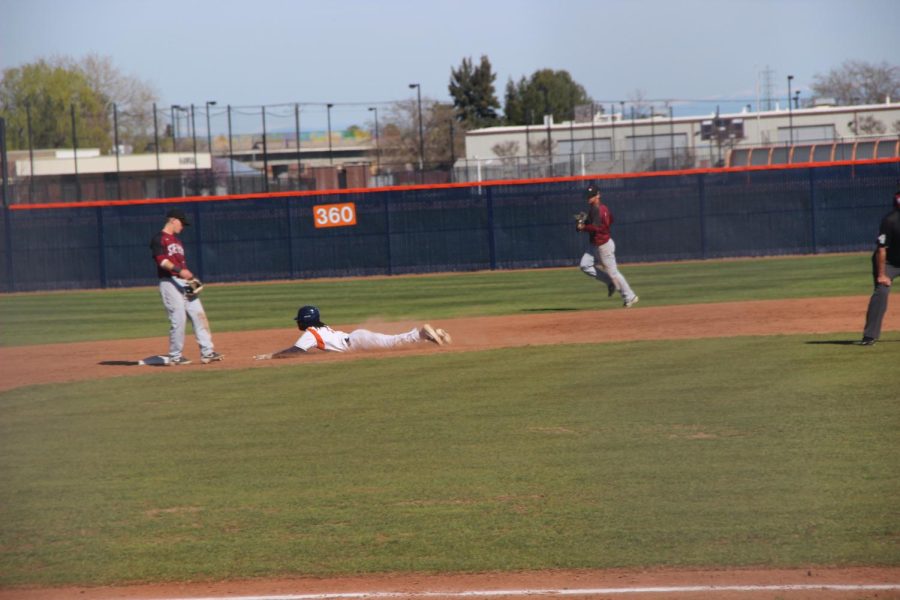 Freshman infielder Essex Brown stole second and later scored in the 5th inning on Thursday. The Hawks struggled against the Wolverines powerful offense, giving up 39 runs in the three game series, including 14 on Thursday.

After rallying back in the bottom of the ninth inning, the Hawks baseball team fell short Thursday against the Sierra Wolverines with a final score of 14-10.

Sophomore right-handed pitcher, Josh Caldwell, got the start on the mound and gave up four earned runs on nine hits, striking out three. The rest of the pitching staff gave up a combined five earned runs.

“Well for this game, we got down really early,” said Head Coach Don Mico. “We didn’t pitch well and we didn’t hit well. But in all honesty, they just beat us.”

The Hawks first run came in the bottom of the fifth inning on an RBI single by sophomore outfielder Burle Dixon, scoring Essex Brown. The second run of the game for the Hawks wasn’t scored until the eighth inning when utility player Joey Pankratz singled, scoring freshman outfielder Jorge Montoya.

Although the team got off to a slow start on Thursday, the Hawks know what they have to do to improve in the series finale against Sierra.

“We just have to pitch better and have better at bats,” D. Mico said. “Tomorrow, we just have to make sure our pitchers are leaving the ball down in the zone.”

Down by 12 runs headed into the bottom half of the ninth, the Hawks rallied for eight runs, highlighted by sophomore catcher Mark Aubrey’s bases clearing triple into the right center gap and dead ball advance to home plate.

“I think that because we started the game off so slow, that late rally showed us that we can really beat any team,” Aubrey said. “We play them again tomorrow so we can just pick up where we left off today.”

Starting sophomore shortstop JD Mico, who sat Thursday’s game out due to a hamstring injury, said the team has something to build off of after the slow start early.

“Today we struggled with finding the zone so that definitely has to be a point of emphasis moving forward,” J. Mico said. “I think the late inning rally helped a lot because it gave us confidence. We know that we can play like that early on in games.”

The Hawks, who are still fourth in the conference after the loss, will play at Sierra College on Friday for the final game of the series before their two non-conference games next week.

“The Big Eight is a tough conference,” D. Mico said. “There are a lot of teams in this league so we just have to go out here and try to compete everyday.”