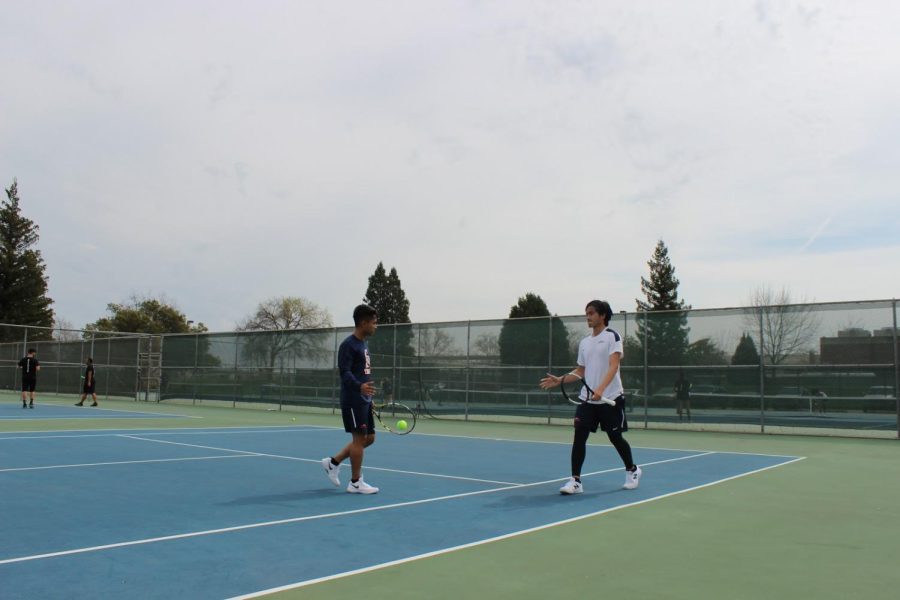 Freshmen Kien Dang (right) and Kyle Lopez (left) celebrate victory in their doubles match on March 19th. Dang and Lopez have been a strong team all year going 3-1 in their matches.

The home court for the Hawks’ men’s tennis team was alive with action following a match between the Hawks and the Reedley College Tigers on March 19, where the Hawks won 6-3.

The Hawks women were also victorious against the Tigers, who had to forfeit their women’s tennis match, due to not having enough players available.

“They did very well,” said Head Coach Eva De Mars. “They beat this team by more points then they did previously.”

De Mars said she credits this to more practice and a good line up this year.

“I come and practice on my own sometimes so that I can keep my body consistent with my skill,” said freshman Steven Vang. “If you just do two practices a week or something like that, you’re not going to improve as much.”

Vang is not the only member on the team with this particular goal in mind.

“I’m still going to do my best,” said Freshman Kien Dang. “I’ll practice more and I will come to coach and see if she has practice for me.”

Dang and Freshman Kyle Lopez competed in a doubles match, winning the match and moving on to their singles matches. Dang won his match against Tiger’s player James Garcia by a score of 6-2, 6-1.

Lopez advises future players to keep practicing and if they play singles, to make sure they play smart and read their opponent and to “just keep grinding out points.”

Freshman Maclean J. Samson said that he just focuses and makes sure to communicate and encourage his teammates.

“I get to hit with my friends,” said Samson. “I get to learn something everyday, I just get better.”

Getting to play with his teammates and being involved is one of the best things about tennis, said Lopez.

“Be positive,” said Lopez. “Come out and play; have fun, if you mess up, it’s okay you’ll get it next time.”