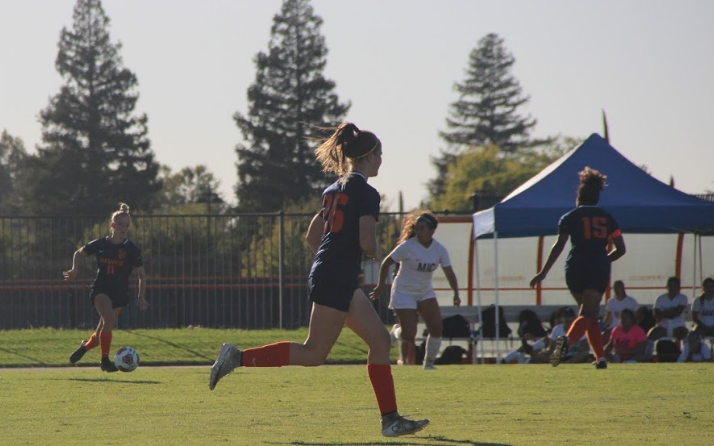 The Hawks played against Modesto Junior College's Pirates on Tuesday. The game ended with a 5-0 score.

The women’s soccer team won their second straight game of the Big 8 with a 5-0 win against the Modesto Junior College Pirates on Tuesday.

“We’re getting closer to playing the kind of soccer I think we’re capable of playing,” said Head Coach Cesar Plasencia. “It’s a work in progress, but we’re getting better.”

The Hawks defense put in some work, defending goalkeeper sophomore Tanayjah Tamano who had nine shots on goal and nine saved shots in the first half.

“Tanayjah had a couple of enormous saves,” said freshman forward Helaina Garcia. “She did amazing.”

The Hawks offense competed just as the defense did with two SOG, and two goals against, the Hawks took the lead 2-0 in the first half.

“The team competed, we worked together and there wasn’t a single player who outshined the other, we all competed well today,” said Garcia.

The second half saw a player switch with their goalies, sophomore Sienna Jackson stepped in and defended the goal for the Hawks.

Jackson got a couple of really nice saves that kept us in the lead throughout the second half, said Garcia.

“Our goalkeepers did really good,” said sophomore defender Hannah Underwood. “We had a few shots on goal and beautiful saves, our goalies always come through and help us on that part.”

Freshman defender Anisa Ware carried the ball across the field and shot a goal with an assist from freshman forward Lucianna Casciaro, maintaining the lead towards the end of the game.

“Working together to finish was one of the highlights of the game,” said Underwood. “We had a few good crosses and plays that helped the goals go into the net.”

The women’s team stands third in the Big 8 conference with a 2-0 lead.

The Hawks play American River College on Oct. 1, after an away game on Sept. 27 against San Joaquin Delta College.

“Come out to the games and support us,” said Underwood.