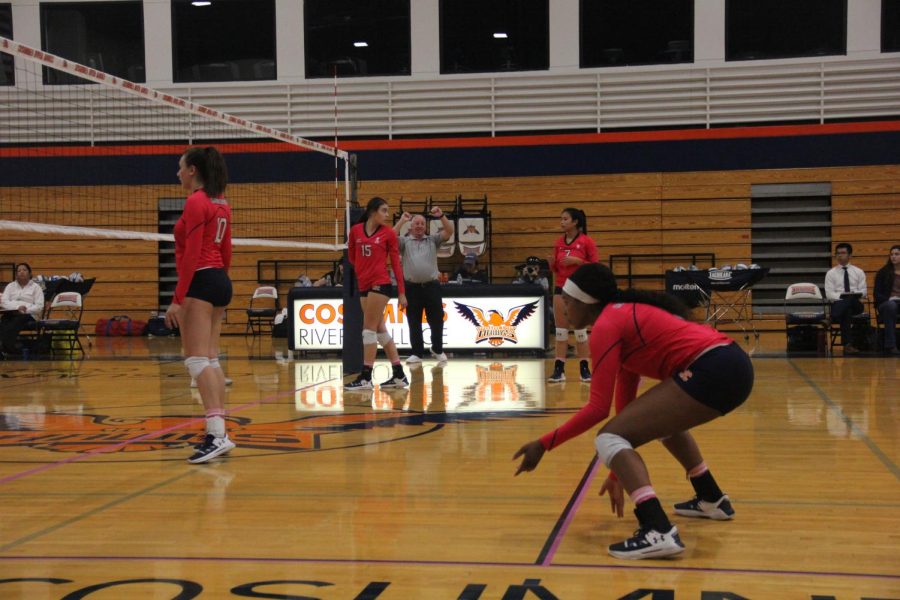 The Hawks get ready to counter a serve from the Diablo Valley Vikings. The Hawks won the game 21-25 against the Vikings on Oct. 15.

The Hawks’ volleyball team served the Diablo Valley Vikings a loss on Oct. 15, consecutively taking all three sets of the game.

The Hawks were able to cut their losing streak after going into their seventh Big 8 conference game of the season with a 1-6 record and an overall 9-10 record.

“We were looking for a win right now and we were able to get that,” said Sowles. “It was our first conference win so we’re happy.”

The Hawks dominated their recent home games at 5-2 but have taken 1-6 in away games.

Sowles said the team puts in a lot of work for their games and further said they train a lot, hyping each other up.

The Hawks, adorned in pink in honor of Breast Cancer Awareness Month, doubled the Vikings’ score in the first set ending the set 25-11.

Sophomore middle blocker Deziree Mckee said she is proud of her team for the shut out.

“I’m confident in my team and our ability to play,” said McKee. “We put a lot of effort in the game, and the first set was just the beginning.”

The Vikings had trouble keeping up with freshman setter Charissa Pham, who connected the ball to the players with precision. This allowed them to spike the ball over the net.

McKee said Pham did a good job passing the ball to the team on point and when they needed it.

The second set saw the Hawks maintain the lead, finishing the set with a final score of 25-17.

“We just competed is all,” said McKee. “We brought the heat and won. My team played excellent today.”

The last set was a close one but the Hawks won, ending the set with a 21-25 score.

Freshman outsider Kaly Dosier said that despite losing, the Vikings weren’t a bad team considering that the Hawks have been there before. She added that before this game, the Hawks were 0-6.

“They worked hard but so did we,” said Dosier. “The win today was earned, and we earned it.”