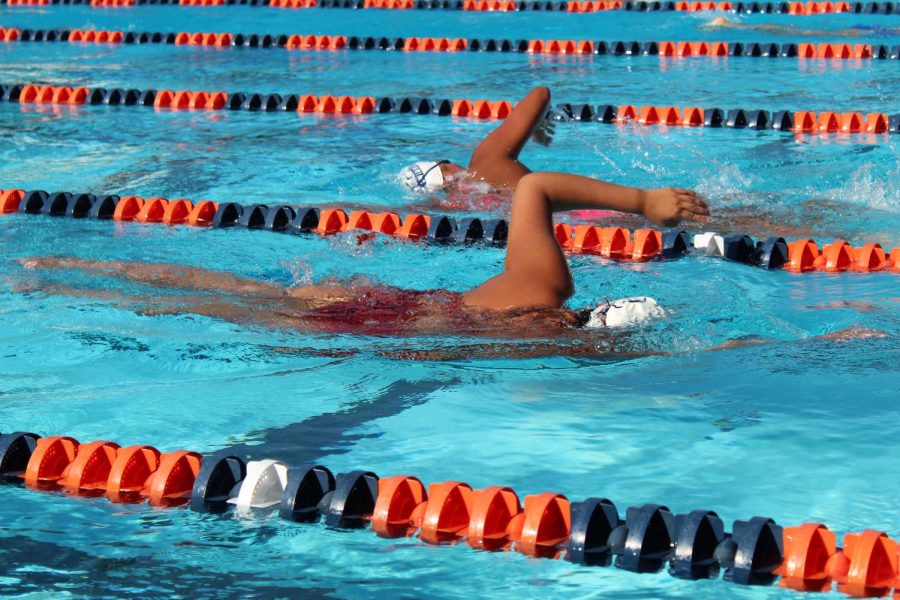 The women's swim team swam for an hour on Thursday during their swim-a-thon fundraiser. The fundraiser aimed to raise money for the team, which would cover expenses such as travel costs or equipment needed for the swimmers to train.

The sun shone brightly on the Hawks’ swim team as they raced back and forth in the pool for their annual swim-a-thon fundraiser that was held on Oct. 31.

Head Coach Liz Zenuk said the purpose of the fundraiser was to raise money to help support any additional travel or specialized equipment that the team might need for training and this year’s swim-a-thon exceeded previous fundraisers.

“This was our most successful swim-a-thon in the team’s history since we started the program,” said Zenuk.

The swimmers were looking for support in more ways than monetarily. If people couldn’t donate, then the team asked the person to dedicate their time to watching the team swim or spread the word of the event.

The Hawks swam for an hour straight to raise money, some athletes even setting goals for themselves on how many laps that they could swim.

“Today went pretty good, I swam above two miles,” said freshman Rosa Peshkoff. “My goal was two miles and I am happy I was able to reach my goal.”

Peshkoff said the team put in the work to raise the funds needed and did a great job in promoting the swim team.

The swim team is preparing for the Spring season and are continuing to train and learn during their off-season, and would like to break previous records in the upcoming season, said Zenuk.

“I am so proud of the team,” said freshman Brylee Brophy. “We all worked so hard and had fun, our hard work today really showed how hard we practiced.”

Brophy said one way to work well with each other is to support each other throughout practices and events like this.

The event also outlined areas that the Hawks needed to improve on and areas they excelled at, said Peshkoff.

Brophy, sophomore Emily Klein and freshman Jasmine Rodriguez had the most laps swam for the swim-a-thon.

The Hawks have an away meet against the Santa Rosa Bear Cubs on Nov. 22.