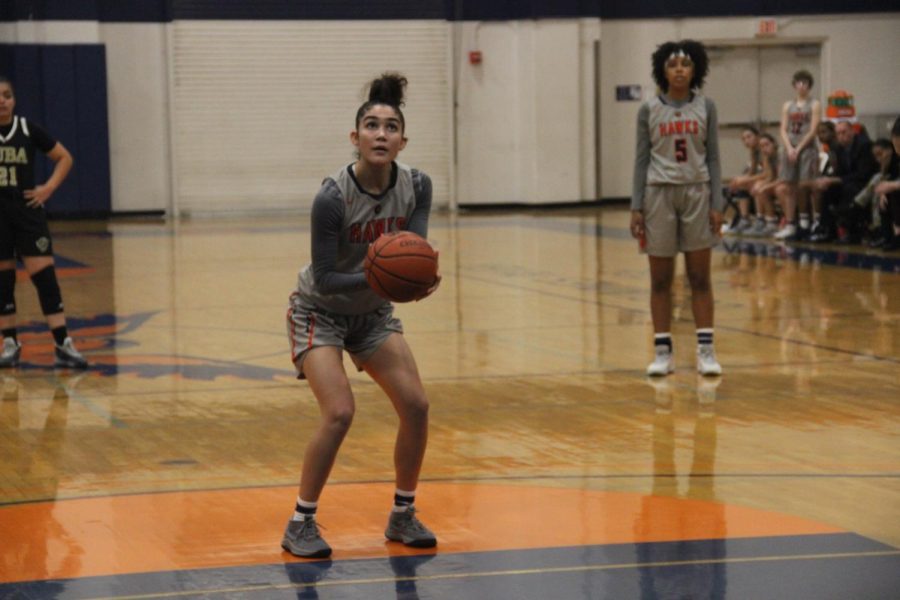 Sophomore guard Arionna Butts gets ready to throw a free throw from the goal line during their game with Yuba College 49ers. The game, which took place on Tuesday, resulted in a 3-6 loss for the Hawks.

The women’s basketball team fell to a 3-6 overall record after an 82-61 loss at home against the Yuba College 49ers on Tuesday.

The game was the fifth of six non-conference games the Hawks will play at home before entering the Big 8 Conference against Sierra College.

Head Coach Coral Sage said the team got off to a slow start early on and never recovered.

“We went a really long stretch during that first quarter without scoring,” said Sage. “If we don’t score right out the gate, we start playing on our heels a little bit.”

Sage said the Hawks played well enough on defense to remain in the game but the offensive struggles ultimately hindered the team from catching up late.

“I thought our defense was right there, but if you’re not scoring, at some point it starts to fall apart,” said Sage.

Sophomore guard Arionna Butts led the team in scoring with 24 points while shooting 30% from the field and going nine for nine at the free-throw line.

“For me, I’m not a fan of losing,” said Butts. “I know that quitting is not an option for us so I just try to push through whatever I can.”

“I think we just simply got outhustled,” said Butts. “Getting into foul trouble and being timid definitely doesn’t help. It was just an off day.”

At home, the Hawks came into the game shooting 35% from the field with a team average of 40 rebounds per game.

Freshman forward Chelsea Shirley said the team felt that they were rushing and they struggled to distribute the basketball as a result.

“We were all talking about it in the locker room,” said Shirley. “We all felt that we were rushing and ball movement was bad.”

The Hawks will begin the Solano Showdown tournament against Chabot College on Dec. 13, followed by two more road games before conference games begin.

Sage said she knew the 49ers were both fast and physical but she anticipates her team will improve from the loss.

“I knew they were a tough team that was going to press us,” said Sage. “We just have to keep working and getting better.”