The Raiders left behind their Oakland legacy, breaking the hearts of fans 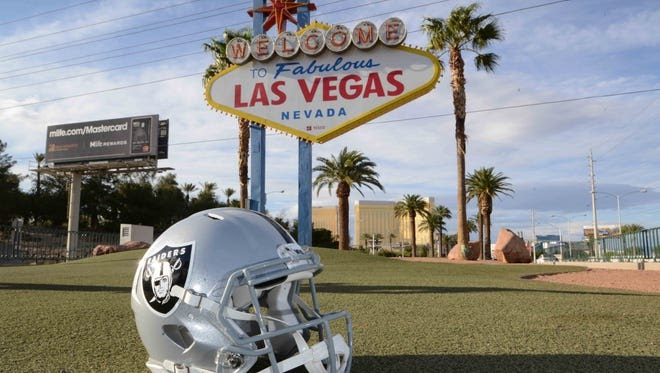 The silver and black in their new home of Las Vegas.

After a gut-wrenching loss to the Jacksonville Jaguars in what was the Raiders’ final game in Oakland, they packed their bags and left behind millions of heartbroken fans.
Twenty four straight years of Oakland football ended in 2019, making Las Vegas the new home of the Raiders as they began the 2020 NFL season.
As a fan of the NFL, my heart sank when I saw that 31 out of the 32 teams voted to approve the organization’s move to Las Vegas. The Raiders have abandoned one of the most passionate fan bases in the entire league and made many fans question why they moved.
Instead of building a new stadium in Oakland, team owner Mark Davis decided that a move to Las Vegas would benefit their team.
The “Raider Nation” fan base was known as one of the rowdiest and most entertaining fans in the league, with people showing up in costumes for their home games.
The south side of the Oakland Coliseum was host to the infamous Black Hole. This is where some of the most passionate and die-hard fans would sit and cheer on their Raiders, distracting opposing teams in any possible way.
The Raiders have already left the city of Oakland once in 1981 to look for a bigger market in Los Angeles. Their tenure there only lasted 14 years before returning back to Oakland.
They are again looking for a bigger market with the move to Las Vegas and betting on “Sin City” to bring in more revenue and fill the seats of their new $2.02 billion stadium.
Sept. 21 marked the Raiders’ first home game in Las Vegas as they took down the New Orleans Saints in dominant fashion on Monday Night Football.
Allegiant Stadium, the new home of the Raiders, was empty due to the guidelines put in place to prevent the spread of the coronavirus, but questions regarding fan turnout when the stadium opens still lingers.

Las Vegas is known as a tourist destination and there are concerns over whether the Raiders will still have a loyal fanbase to attend each game. Many Raider fans will continue to support the team, but from a distance as the travel is too far to make for a “home” game away from home.
The constant relocation of the Raiders continues to raise questions on whether they will be able to fill seats consistently. Are there enough lingering fans in Los Angeles from their southern California tenure? Do their two stints in Oakland form enough of a fanbase to support them in Las Vegas?
One thing that the Raiders do know, is that their fans from Oakland love them, and many of their players and personnel love their fans back.
In a press conference after their last game in Oakland, Raiders Head Coach Jon Gruden gave a heartfelt response to the fanbase and city of Oakland.
“It’s the Oakland Raiders. It’s the appreciation, the loyalty, that these fans, I think, have had for the Raiders, and we’re going to miss them,” said Gruden. “It’s going to be sad walking out of here for the last time. It’s a lot to wrap your arms around, but we love our fans, we love the city of Oakland, we thank them, and we’ll certainly miss them.”
Not only will the fans take a hit, but so will the city. With the departure of the Raiders, Oakland now relies on its professional baseball team, the Athletics, to bring in revenue and tourists.
With the Raiders in town, Oakland would attract an average of 63,000 people just to watch their NFL team play on Sundays. The city will seem more lifeless and empty without a flurry of fans flocking from different parts of California to experience the Raiders in their home stadium.
Though Raider fans were hurt by the team’s departure, they will always support the silver and black wherever they go, living by the team’s long-time motto.
“Just win, baby.”