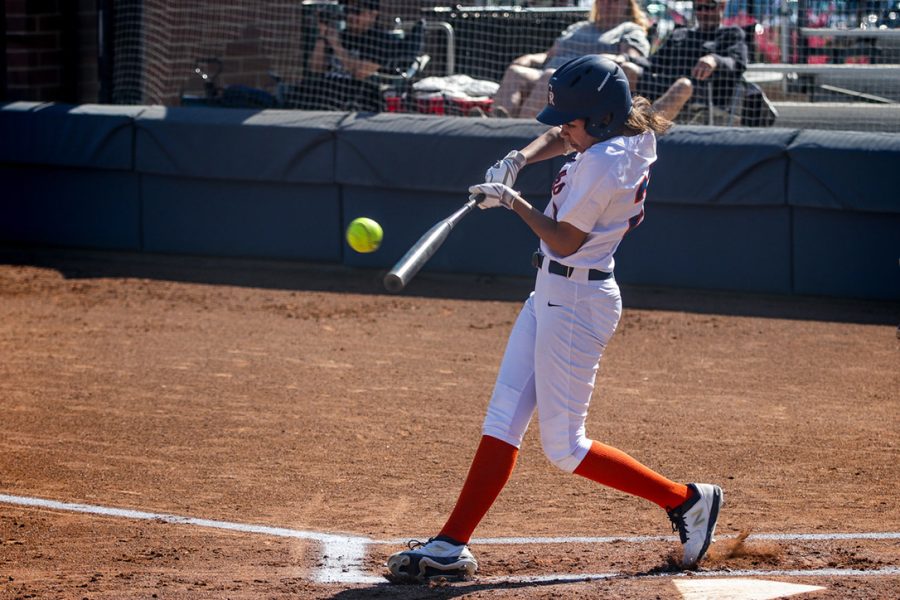 Coronado swinging at a pitch during a game in the spring 2020 season. Coronado was leading the team in batting average and runs scored before the pandemic halted the season.

The Hawks softball team got off to a good start during the spring 2020 season, producing a record of 14-9 and a conference record of 5-4 up until the pandemic cut their season short.
Often batting leadoff in the lineup, sophomore shortstop Leandra Coronado was leading the team with a .468 batting average and a team-high of 26 runs.
“I love the competitiveness of it and definitely being able to meet new people, all of that together made me love the game,” said Coronado.
The shortstop position is considered to be among the most demanding defensive positions in the sport, requiring versatile and agile players such as Coronado herself.
“She has a great glove and gets rid of the ball quickly at the shortstop position,” said Women’s Softball Coach Kristy Schroeder.
Coronado started her athletic career at a young age, playing T-ball and in addition to softball, played soccer, basketball and tennis. Her competitive nature has been an asset to the team.
“The biggest thing with Leandra is that she’s a great competitor,” said Schroeder. “A lot of times when we were behind throughout the season, she found a way to get on base when we really needed a baserunner or to get that base hit.”
Coronado is also a powerhouse when it’s her turn at-bat.
“She does a nice job working her at-bats and getting on base,” said Schroeder. “She didn’t strike out very much at all.”
Schroeder said Coronado has what it takes to compete at the next level and has qualities on and off the field that coaches look for in a player.
“She’s definitely mature for her age and takes care of business,” said Schroeder. “That’s what a coach wants, somebody that gives you everything they got for practice, works on their game and does their due diligence in the classroom, and she does that.”
Although it’s uncertain if athletes will be back on the field this season, Coronado finds motivation in thinking about her future.
“I want to finish college and get my bachelor’s and transfer,” said Coronado. “What really motivates me is success for my future and finishing those plans that I have for myself.”
This season is crucial to Coronado’s athletic career as it will determine if she plays softball at a university. Although this year is unlike any other with unprecedented challenges, it does not discourage Coronado from achieving her goals.
“It depends if we play softball, I applied to UCLA and UC Davis,” said Coronado. “But hopefully I get into UCLA, that’s my number one.”
Sophomore outfielder Emilee Mort described her experience with Coronado as motivational and cheerful.
“She’s a really good player and an amazing person,” said Mort. “She’s always cheering all of us on, before games and during games, she’s always excited to get out there and play.”
Coronado hopes to return to the field later this year. The California Community College Athletic Association’s opt-in or opt-out date for spring sports is Feb. 26, according to the CCCAA website.
Coronado swinging at a pitch during a game in the spring 2020 season. Coronado was leading the team in batting average and runs scored before the pandemic halted the season.