Social media brings light to inequalities in the NCAA tournament 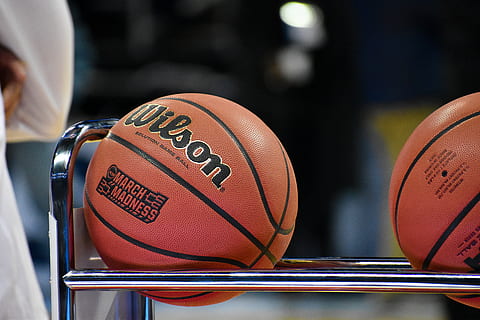 Women basketball players and coaches criticize the NCAA after not receiving the same equipment as the men's teams. Players took to social media to bring attention to the unfair treatment within the organization.

March Madness is the time of year that brings tons of excitement with the NCAA’s bracket-style tournament, but after a social media post displaying disparities between the men’s and women’s weight room, it has gathered a lot of negative attention.
Before the women’s tournament started, there were posts all over social media showing the men’s luxurious weight room, filled to the brim with every machine you could imagine. On the other hand, the women’s weight room consisted of a tiny weight rack and some yoga mats, leaving more than half of the gym empty.
Oregon forward Sedona Prince brought this issue to light after posting a TikTok to show the imbalance of equipment provided.

These differences didn’t just stop with the weight room. More social media posts began to arise, showcasing the food that was served and apparel given to the women’s team, which was a lot less than the men were gifted with.

The NCAA rightfully received a lot of criticism for the lack of equipment supplied to the women’s teams.
After receiving backlash, the NCAA sent out a news release on March 19 to address the problem and apologize.
“We fell short this year in what we’ve been doing to prepare in the past 60 days for 64 teams to be here in San Antonio,” said Lynn Holzman, NCAA Vice President of Women’s Basketball.
Falling short is an understatement of what the NCAA was able to provide the women. They absolutely flopped as the weight room was just one of the many problems pointed out about the tournament.
Players also posted their daily meals that were given for them while participating in the tournament, with their food looking like it was just taken out of the microwave.
On the other hand, the male athletes were gifted with huge trays of a variety of food to keep them happy.
This disparity is highly disrespectful to these female athletes, causing coaches to speak out for their players who worked so hard to get there.
South Carolina coach Dawn Staley, who is also the women’s Team USA coach, slammed the NCAA in a statement on March 19.
“We cannot as leaders of young women allow Mark Emmert and his team to use us and our student-athletes at their convenience,” Staley said. “Every team here in San Antonio has earned and deserves as minimum the same level of respect as the men. All the teams here dealt with the same issues as the men’s teams this season, yet their ‘reward’ is different.”
After the apology was given, NCAA president Mark Emmert wrote a letter in response to public criticism that “much has been resolved,” regarding the inequalities between the men and women.
“For now, please know that I am deeply disappointed that the past few days have been focused on NCAA blunders rather than the remarkable athletes in San Antonio,” Emmert wrote.
The fact that these issues needed to be resolved in the first place shows that the NCAA didn’t try to provide their athletes with the best they could possibly give, hoping that their women’s teams wouldn’t question the disparities.
An apology is not what these women are looking for, but to see actual change within sports.
Athletes of all genders work so hard to get where they are, and it’s time to finally give them the respect that they well deserve.