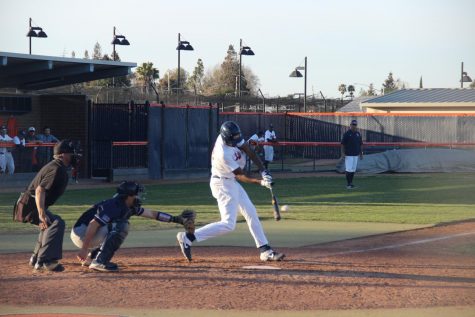 Sophomore outfielder Lakeal Morris hitting a ball to right field against the American River College Beavers on Feb. 24, 2020. Spring sports are in the clear to return to practicing and conditioning, and hopefully competition, as long as Sacramento county stays in the red tier.

The Hawks and our fellow Los Rios colleges decided to opt in for Spring 2 sports on Feb. 24.
After the announcement, athletic directors across the district began working on a plan to resume practice and, eventually, competition.
“The greatest part is that we’ve been working so hard on this, from trainers, coaches, directors and athletes,” said Cosumnes River College Athletic Director Colin Pregliasco. “I know that we are fully prepared for more ‘new normal.’ It’s not what student-athletes are used to, but I know that we’re going to do it the right way.”
The main goal as of now is to allow sports to return to campus at some capacity for things like practice and conditioning, Pregliasco said. As of now, Pregliasco and the other athletic directors are hoping to resume competition by April 10.
“It’s a very fluid and dynamic plan,” Pregliasco said.
Although the Los Rios Community College District made the announcement in February, the return of sports is only possible if Sacramento county stays in the red tier, Pregliasco said. The county returned to the red, or substantial, tier on March 16.
In the substantial tier, youth and recreational sports are allowed to return outdoors but are subject to additional requirements, according to the California government’s Blueprint for a Safer Economy. These additional requirements include mask requirements and specifies that, “teams can return to competition only if they adhere to the stricter requirements in place for college teams, which include rigorous testing requirements around each competition, following contract tracing protocols and coordination with local health authorities.”
Late spring sports returned to campus on March 23 but were limited to just conditioning with no equipment, said Liz Zenuk, women’s swim coach.
“In preparation, we had been symptom tracking for almost three weeks before we were admitted onto campus,” Zenuk said. “Now that we are on campus, we are expected to symptom track daily and get a COVID-19 test every two weeks.”
Athletes and personnel who arrive on campus must pass a screening with a temperature check, said Zenuk and Pregliasco.
“There are district, county and state guidelines; all of them have to be met,” Pregliasco said. “So far, we’ve done team COVID-19 information sessions for coaches, athletes and staff.”
Student-athletes have the option to opt-out if they feel unsafe, Pregliasco said. He added that accountability is imperative as mistakes can be consequential to all sports families and may jeopardize the return of fall sports in the future.
“All eyes are on us,” Pregliasco said. “It’s a privilege to be able to do this again, not a right.”
Despite the strict protocols, both Pregliasco and Zenuk are excited to return to campus.
“Swimming is considered one of the lowest risk sports, and each CRC athlete has patiently waited while many surrounding clubs and high schools returned to swimming,” Zenuk said. “It’s been a hard year for all of us, and we are eager to move forward with our training.”
Spring sports will resume standard practice on April 5, with fall sports still limited to conditioning until future notice.