49ers trade up for future QB, but will they choose the right one? 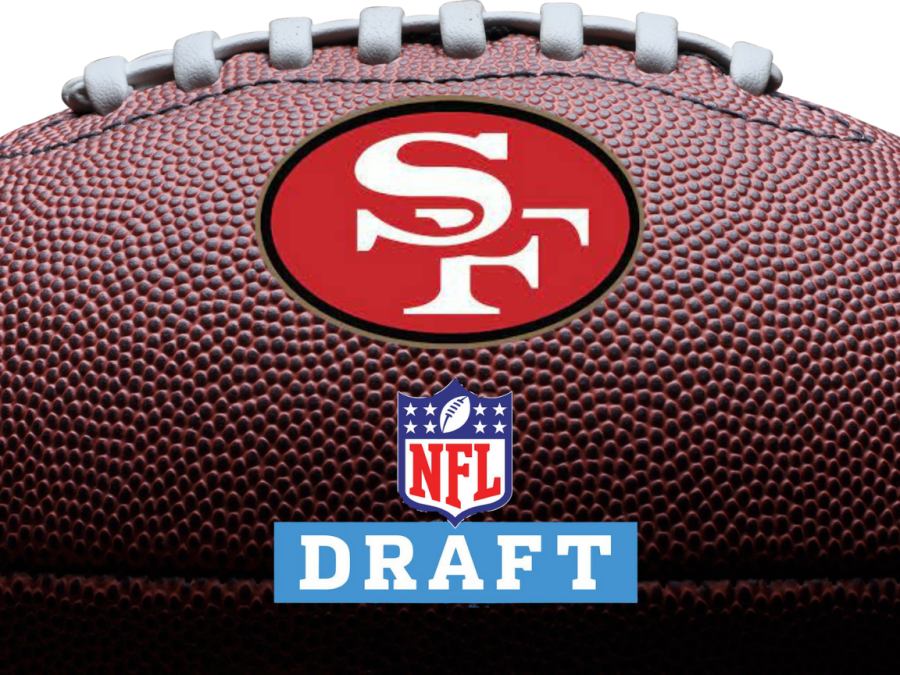 Canva photo made by Austin Scott and Adam Camarena

The San Francisco 49ers traded up to the No. 3 pick for the 2021 NFL Draft that starts this Thursday, with numerous reports and rumors suggesting they will pick a quarterback. With the 49ers seemingly moving on from Jimmy Garoppolo, the organization looks to be deciding between top-quarterback prospects Mac Jones and Trey Lance.

The highly-anticipated 2021 NFL Draft kicks off on Thursday, and wraps up on Saturday, with the San Francisco 49ers holding the No. 3 pick from the Miami Dolphins to possibly draft their future franchise quarterback.
To get the No. 3 pick, the 49ers ended up trading their No. 12 pick, a first-and third-round pick in 2022, along with a first-round pick in 2023 to the Dolphins, said ESPN’s Adam Schefter.
This trade is speculated to be a move to grab one of the top quarterback prospects in this year’s loaded draft class. Some of the top quarterbacks include Clemson’s Trevor Lawrence, Ohio State’s Justin Fields, BYU’s Zach Wilson, Alabama’s Mac Jones and North Dakota State’s Trey Lance.
Lawrence and Wilson are expected to be taken with the top two picks, leaving the 49ers to choose between Fields, Jones and Lance.
The most recent buzz surfacing around the 49ers No. 3 pick suggests that it has boiled down to a two-man race between Jones and Lance, said NFL Insider Ian Rapoport.

At first, the organization appeared to be locked in on Jones after Alabama’s second Pro Day, but they’ve recently been split between Jones and Lance in the coming weeks of the draft.
It seems as if many of the 49ers’ personnel departments have their eyes set on Trey Lance, with Kyle Shanahan looking in the direction of Mac Jones, said ESPN’s Todd McShay.
Assuming that the 49ers are torn between Jones and Lance and as to which one is the right choice, let us break it down for you.
The 49ers traded for Jimmy Garoppolo back in 2017 from the New England Patriots to lead the team, and under the leadership of “Jimmy G,” the 49ers appeared in Super Bowl LIV with a top-tier defense and an unflashy, “winning-system” offense. Since then, Garoppolo has battled with injuries and the 49ers have become stagnant on offense, becoming a mediocre team.
Before it was narrowed down between Jones and Lance, Justin Fields was considered a top-3, debatably top-2, according to many NFL experts and reports and it seems a bit odd for the 49ers to move on from the possibility of Fields.
Fields is an explosive dual-threat quarterback that threw for 22 touchdowns and rushed for five more in 2020, along with leading Ohio State to the College Football Playoff National Championship.
We would like to be blunt and just say that drafting Mac Jones with the No. 3 pick is starting your franchise with someone that has the upside of a carbon copy of Garropolo who is inexperienced, young and unproven, therefore it is a waste of a top draft selection.
Although Mac Jones seems to be a smart game-manager, like Garoppolo, Jones comes from a privileged situation where at least five Alabama players are projected to land in the first round. Jones has a good chance to be a solid, game-winning quarterback in this league, but it just doesn’t fit the direction the 49ers seem to be heading towards.
If the 49ers are stuck choosing between Jones and Lance and have decided to move on from Garoppolo, then the 49ers need to go with a quarterback that offers much more firepower and explosiveness. That quarterback being Trey Lance.
Lance is more of a raw prospect than Jones but possesses unique traits like arm strength and elite athleticism.
While we haven’t seen Lance play since 2019 due to North Dakota State canceling their season because of the pandemic, his 2019 stats were absurd. Lance threw for over 2,700 yards and tossed 28 touchdowns, throwing an astounding zero interceptions. Lance also added 14 touchdowns on the ground and over 1,000 yards rushing.
The 49ers are going to have many options to choose from with the No. 3 pick. Lance seems to realistically be the best option, Fields has tremendous upside and should be strongly considered, and at the bottom of their options should be Mac Jones.
This draft will be like no other because of the pandemic limiting college football schedules, making it harder to compare and scout prospects.
Nevertheless, the 2021 NFL Draft will be exciting to watch and is expected to be one of the most loaded draft classes in recent memory, let’s just hope the 49ers don’t make the wrong choice.