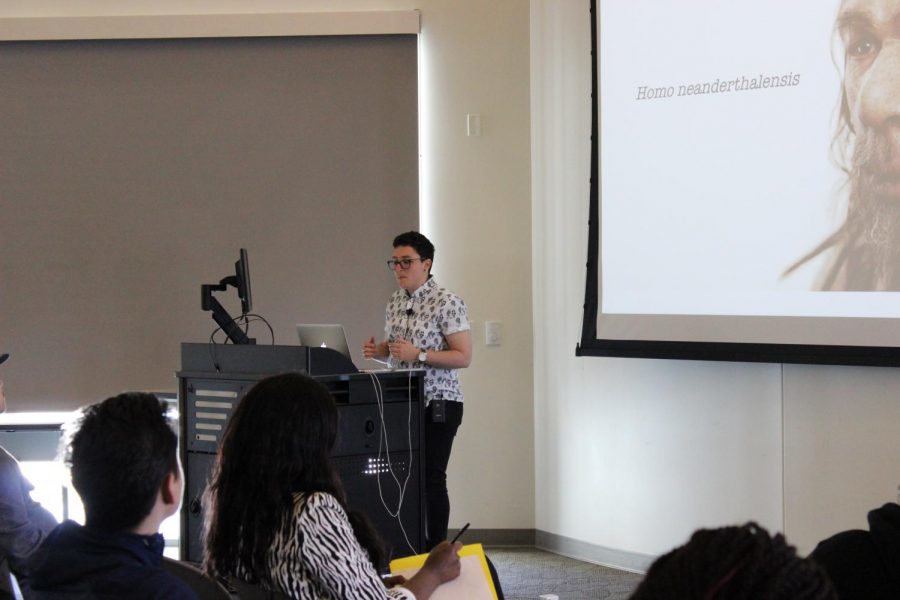 Dr. Anna Goldfield explains her PowerPoint slides to the audience in WINN 150.

The event, titled Anthro Show & Tell with Dr. Anna Goldfield, was an hour long informative talk by Goldfield. She discussed her time doing archeology in France and how it led to her using her skills to illustrate the comic book-style textbook, “The Neanderthal Child of Roc de Marsal: A Prehistoric Mystery.”

“When I first started excavating, I was interested in archaeological illustrations so I had asked the team if I could practice on some of the artifacts that we had,” Goldfield said. “And they saw me doing it and said, ‘Oh, you’re pretty good at drawing, we’ve had this idea to make a more approachable book that takes you through the basics of archeology, are you interested?’”

The textbook uses illustrations and dialog boxes to tell the story and excavation process of the Neanderthal Child found in the Roc de Marsal cave in southwestern France. The book uses a narrative story of a fictional main character, but tied with real people and science.

The first half of the event went into the content and findings shown in the textbook, with Goldfield going into the history of the Neanderthal Child.

The discovery of this Neanderthal Child in a pit back in 1961 led many to interpret it as a burial, which would show that Neanderthals were capable of more complex thoughts than previously believed.

But through recent excavations and discoveries, questions have rose about the validity of this claim.

“The evidence stacks up at the Roc de Marsal infant,” Goldfield said. “[It] was in a natural pit, it was in an atypical burial position, and it was covered in multiple sediment layers.”

Despite the evidence though, Goldfield does not say it is absolutely conclusive about our understanding of Neanderthals.

“We can rule out that the Roc de Marsal child was a burial in the sense of a modern human deliberate burial with some conception of the afterlife,” Goldfield said. “But we can’t completely rule out a Neanderthal, in response to the death of a loved one, doing something different rather than just leaving the body and moving on.”

The second half of the event was used by Goldfield to demonstrate her role in the textbook by showing how she was able to do the illustrations.

By using her drawing tablet with a stylus and the program Sketchbook Pro, Goldfield showed off the capabilities and challenges of digital drawing.

“Once you figure out how to draw on the tablet but look at the computer screen, which takes a bit of adjusting, you can pick the brush you want and it’ll let you draw in layers.” Goldfield said.

Goldfield engaged the audience for suggestions on what to draw, resulting in her quickly sketching a humerus, the long bone from shoulder to elbow in humans.

“I’m not going to put all of you on the spot by asking what part I’m drawing right now.” Goldfield said.

The hour-long event concluded with a short questions section, where Goldfield answered inquiries from the audience ranged from going further in depth about the Neanderthal child to asking if she would ever do a sequel to the textbook.

“I think if I had a chance to do it over or do another one, I would make the main character female or myself because women in sciences are a bit underrepresented,” Goldfield said. “I’ve also become much more proficient on the illustrating program so overall, I think I would do a better job with the drawings.”

The topics of archeology and illustration attracted a lot of students from both fields, allowing both sides to learn something new.

“I liked the event. I was expecting more about illustration but I thought it was interesting how she was super passionate about the styles and how she got into archeology.” 19-year-old Alexis Gutierrez said. She is an art new media major.

“I’m part of the campus,” Robinson said. “I always come to events so I think more things like this should be on campus.”