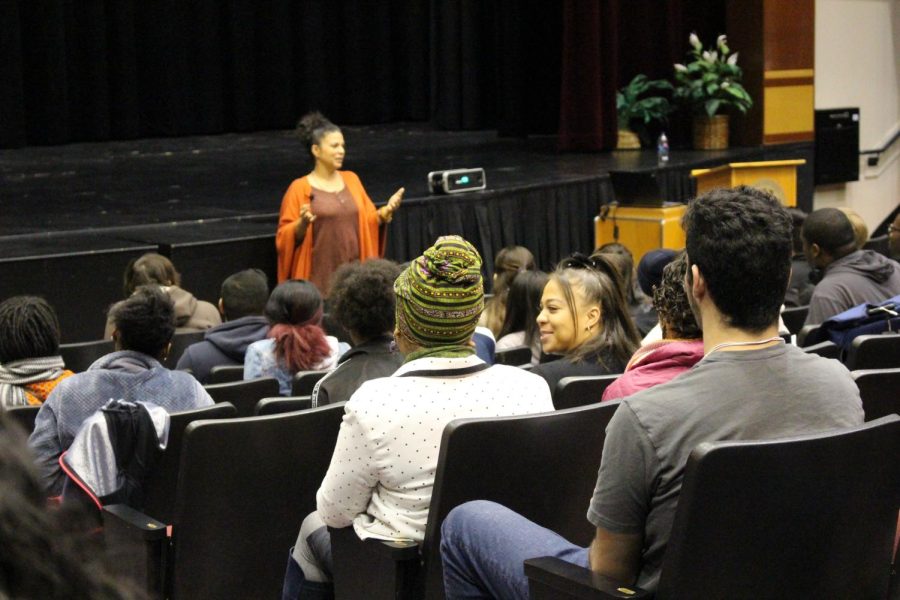 Dr. Melina Abdullah possesses her doctorate in political science from the University of Southern California, B.A in African American studies at Howard University.

She is an original founder of the Black Lives Matter movement, maintaining her leadership of the Los Angeles chapter and has dedicated her life to fighting for what she believes in.

“I think beyond the vote, we need to think about how we engage these systems of power,” said Abdullah. “It’s really important that as there’s a presidential election, that we challenge candidates and I mean all of them, to really represent the interest of the most oppressed people.”

Abdullah started with the history of how Black History Month came to be a nationally recognized event, lead into the importance of voting and closed with the topic of thinking creatively to find ways to change a world that is faulted by design.

“For me it was eye opening because sometimes I struggle with taking action,” said Gabriel Bonilla, 18-year-old, mechanical engineering major. “I get really worked up about stuff like that but I just don’t know how to take action because I feel overwhelmed with just what to do.”

Abdullah emphasized that a revolution of change takes more than just voting. By actually standing up for what one believes in, one has to experience hard times, she said.

She continued by highlighting the fact that “Martin Luther King went to jail 40 times” during his campaign.

“It was very liberatarian, I could tell,” said Jayson Urban, 22-year-old film and digital production major. “I kind of had questions at the end in regards to taking police out of schools for protection, but all the corruption I’m all for getting rid of.”

“The BHM committee selected Abdullah because they were listening to students’ concerns about African Americans and their contribution to the American Democratic project,” said LaTonya Williams, dean of social and behavioral sciences. “What we hear are what are African Americans doing  or they’re not doing enough, or that students are very disillusioned and discouraged by the American political system and they want to know why they should continue to participate.”

Abdullah’s keynote presentation was the start of a month of events dedicated to Black History.

The next major event will take place on Feb. 11 at 9 a.m. in the Winn Center, where they will be hosting the African American Owned Business Expo. This event will highlight and help local business owners and aspiring entrepreneurs cultivate growth.