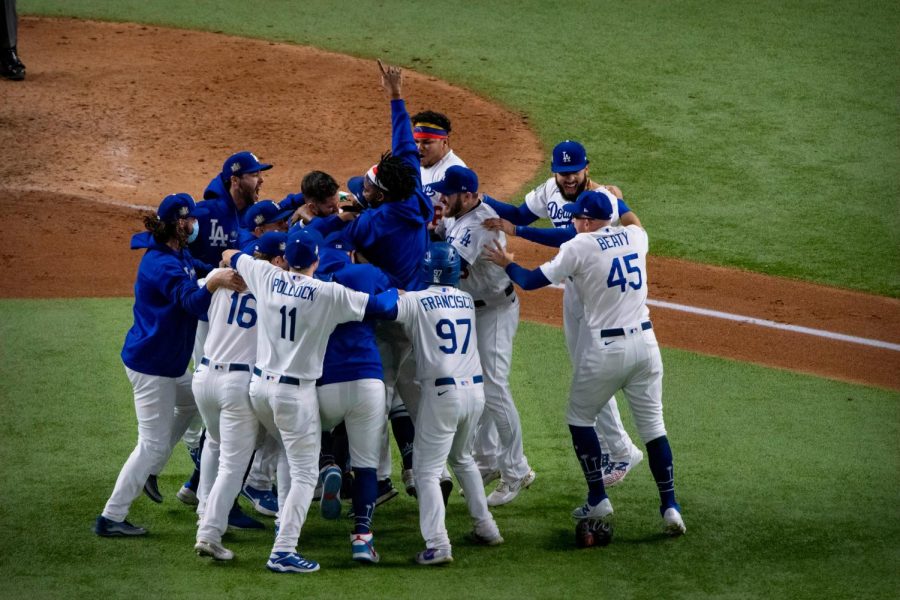 The Dodgers on-field celebration for their Game 6 clincher for their first World Series since 1988. All Dodger players rush to the mound to celebrate after Dodgers pitcher, Julio Urias, records the last out.

In a gritty six game set between the Los Angeles Dodgers and the Tampa Bay Rays, the Dodgers brought home the trophy for the first time since 1988, winning Game 6 by a final score of 3-1 on Tuesday.
The Dodgers winning the World Series cemented an already happy LA fanbase, as the LA Lakers respectfully won their championship on Oct. 11. The last time both the Lakers and Dodgers won a championship in the same year happens to be 1988, the last time the Dodgers hoisted the trophy.
Dodgers right-fielder Mookie Betts, arguably the final piece of the Dodgers superteam and the new face of baseball, was the X-factor the Dodgers needed to put an end to their past decade of postseason woes. Betts made a game-changing impact with the glove and bat throughout the entire postseason, batting .296, with 8 RBIs, and stealing six bases.
Betts from the leadoff spot was always a threat offensively, even if his batting average in the postseason doesn’t jump out at you. Teams never wanted to fall behind in the count with Betts, as he is such a dangerous hitter from the leadoff spot, leading to a .378 OBP and .927 OPS respectively.
The player that did break out this postseason was Dodgers shortstop, National League Championship Series and World Series MVP, Corey Seager. Seager posted a .338 batting average throughout this postseason, along with eight home runs, driving in 20 runs, and an OPS of 1.171. In the World Series alone, he hit .400 to go along with his .556 OBP, two home runs and three RBIs en route to being picked as the MVP of the series.
The Dodgers do deserve a lot of credit for finally getting over the hump and winning their first fall classic in 32 years, but let’s not forget about their opponent the Rays. This is the first time the two best teams in baseball face each other in the World Series since 2013, with the Dodgers posting the best regular season record in all of baseball, 43-17, and the Rays with best record in the American League, 40-20.
The Rays, who have one of the lowest payrolls in baseball, were able to compete against a team with one of the highest. They do not have the big time names like the Dodgers as far as players go, but through scouting, they were able to put together a team that made it to the Rays first World Series appearance since 2008.
Who led the charge for the Rays offensively? No doubt the best player this postseason and with one of the best offensive performances in the history of postseason play, Randy Arozarena.
The 25-year-old Cuban outfielder burst onto the scene this postseason with outstanding performances early on, but the public would have never expected him to have the stats he did, along with the records he shattered in the process.
Arozarena’s final postseason stats include a .377 batting average, 1.273 OPS, 14 RBIs, along with the postseason records shattered with the most home runs in a single postseason with 10 and most hits in a postseason with 29. These new records are truly amazing and we may not see them shattered for a while, especially with how pitching has evolved to be so dominant in today’s game.
This series did not go without controversy over managerial decisions. The probable manager of the year award winner, Rays manager Kevin Cash pulled his ace starting pitcher, Blake Snell, in the sixth inning while he was dominating.
In Game 6, with the Dodgers needing one win to clinch the series, it seemed the Rays had the chance to send the series to a Game 7 due to the dominance of Snell. Through 5 ⅓ innings, Snell had given up only two hits, struck out nine batters, along with an impressive 16 swings and misses from the Dodgers lineup.
Analytics have taken over the game and they say batting average increases when a starting pitcher faces a lineup the third time. After a single from the ninth hitter, Cash walked out to the mound to take the ball from Snell, despite the visible negative reaction from Snell. Cash handed the game over to his dominant bullpen but Dodger hitters were just happy to see someone else on the mound besides Snell.
Things unraveled with a Betts double, a wild pitch, and a single that gave the lead to the Dodgers who did not look back. Surely, they were grateful they didn’t have to face Snell which could have forced a Game 7.
Arguably the best pitcher of this generation, Dodgers starting pitcher Clayton Kershaw, finally was able to get his World Series ring, which was the last thing he needed to add to his resume for his hall of fame career. Kershaw was always in the mix of a big game loss or big hit given up to lose a game in the playoffs, so this win can finally put to rest his journey towards a ring.
Even with a couple of key players for the Dodgers becoming free agents this offseason, don’t count them out to win a couple of more championships for years to come. With a complete dominance of the National League West, you can always count on them making the postseason and once you are playing October baseball, anything can happen.