J. Cole does his best work in ‘The Off-Season’ 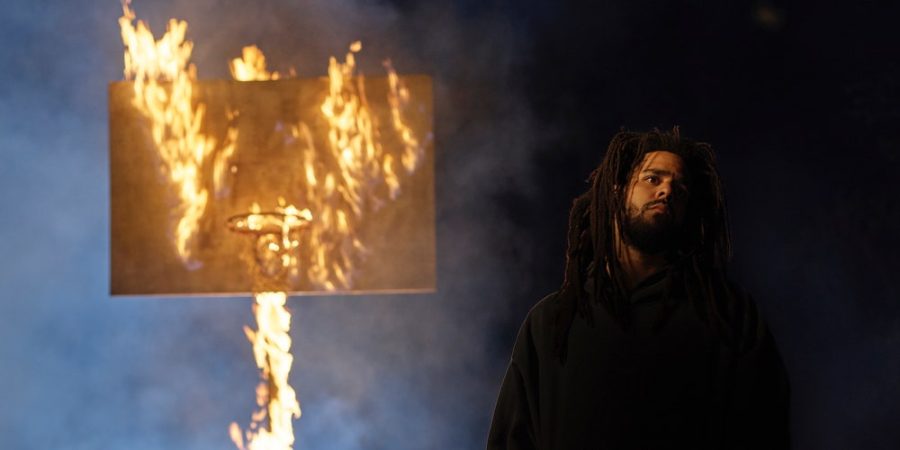 Album cover for J. Cole's sixth album, "The Off-Season." The album was released on Friday.

With any luck, the barbershop chair debates on the best pen, the best rapper arguments floating in smoke-filled rooms and the ornery discussions of what constitutes “real rap” will live on forever.
For more than a decade now, these discussions inevitably involve Jermaine Cole, the Fayetteville, North Carolina producer, rapper and music label founder professionally known as J. Cole.
Cole erupted on the scene during the “blog-era” of the late 2000s-early 2010s before streaming became the norm. He uses his clever wordplay and flow that’s equal parts storytelling and punchlines, combined with his irrefutable authenticity to produce traditional rap songs without swaying from modernity.
Many mixtapes, tours and albums later, Cole released his sixth solo album, “The Off-Season,” on Friday, three years after his last release, “KOD.”
In “KOD,” Cole ditched some of his trademark competitiveness and appointed himself as the cool uncle of rap, providing criticism and guidance towards a younger generation of artists. A point further exemplified by Grammy-nominated single “MIDDLE CHILD,” where Cole examines his spot on the rap timeline: right in the middle of the old and new generations of hip hop.
“If I’m bettin’ on myself, then I’ll completely double down,” Cole raps on album opener “95.south,” before spending the rest of the album going all-in on the Cole World experience but with a more blithe approach.
No songs on “The Off-Season” are trying to be radio singles, and after six albums, Cole no longer needs to compare himself to his idols such as Nas, Jay Z or Andre 3000.
Fortunately, “The Off-Season” also spares us from Cole’s half-hearted love songs about folding laundry, awkwardly navigating puberty in algebra class or bringing up Trump quotes during an undressing session.
Instead, the rapper famously known for “going platinum without features” continues his collaborative spirit from the last few years.
Cole regroups with 21 Savage on “my.life,” a cold and soulful sequel to Savage’s single, “a lot.” Cole later teams with another Atlanta prospect, Lil Baby, on album highlight “pride.is.the.devil.”
Despite being the middle child in this family, Cole brings the best out of both of them, with 21 and Lil Baby proving that Cole’s style is more than the last hanging thread of hip hop sewn before the Soundcloud era.
Additionally, the collaborations exist outside the recording booth, as Cole was not the album’s sole producer. Producers like Timbaland, Boi-1da, DJ Dahi, T-Minus, Cole himself and more supplied their unique sounds to compliment Cole’s wordplay.
The result shows us that Cole is best when he brings his decade-long experience to collaborations and ditches the forced legacy raps and corny radio single attempts.
While “The Off-Season” stands as Cole’s most impressive work to date, it is not without his past shortcomings.
Many of the punchlines don’t land, shrugged off or slipped like they’ve been thrown at Floyd Mayweather. The single “the.climb.back,” is full of them, and removing it would have strengthened the album’s integrity.
Cole has always compared himself to competitors, typically in the NBA. Honestly, the heated debates surrounding Cole aren’t much different than LeBron James: is he the best right now?

But here’s the bottom line, both Cole and James have left their stamp on the game, they’re still here and they’re still winning.
“The Off-Season” won’t push Cole closer to G.O.A.T status, but it definitely doesn’t pull him towards mediocrity. Instead, it renders the debate irrelevant, proving that Cole understands his assignment and plays the role exceptionally.