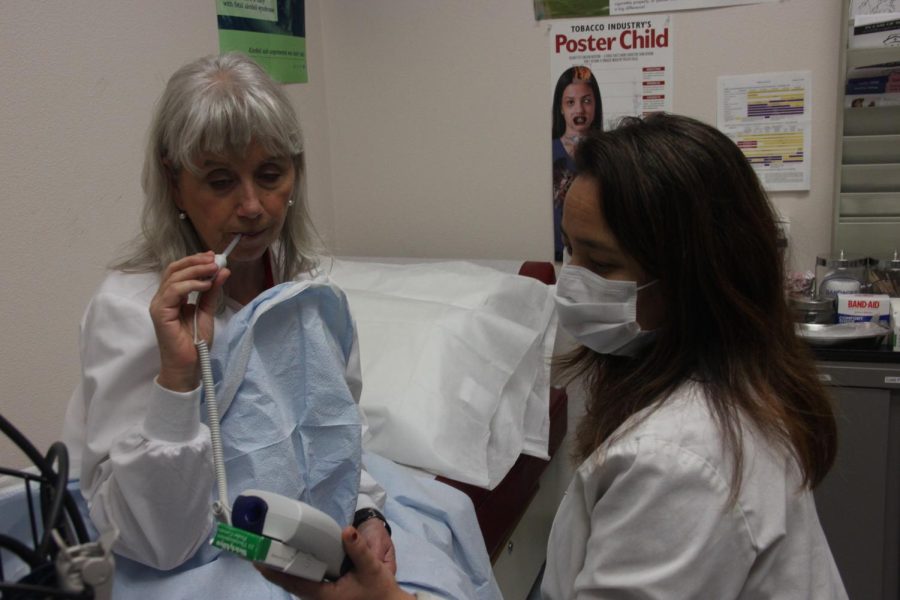 Students are battling the flu season with masks and teas in hand as they face what is to be considered an ‘epidemic’ that’s sweeping 42 states, according to CBS News.

According to the Centers for Disease Control and Prevention, a total of 53 child fatalities have been reported for the 2017-2018 Weekly U.S. Influenza Surveillance Report.

College Nurse Michelle Barkley has been with Cosumnes River College for 15 years and said that this is the worst flu season she’s seen in her 20 years of nursing.

Barkley sent a campus-wide email with tips on how to care for yourself when the flu hits. The tips included things ranging from home remedies to what kind of medicines to take when you’re sick.

“Stay home if you are sick. The world isn’t going to end if you don’t show up to class. Get in touch with your instructor and work out a way to make up the work,” said Barkley.

Students such as 19-year-old art major Lilianna Ramos shared a common concern: missing so much class that one must play catch-up to in order to maintain their grades.

“I hate being sick. The worst thing I can do to myself is get sick and I always feel bad because I don’t like missing class,” Ramos said.

But because the flu season is a time of usual absenteeism some professors, such as Ellen Arden-Ogle of communication studies, knows that missing class is sometimes unavoidable. If a student cannot attend class as originally planned, Arden-Ogle offers alternatives.

“Some good tips are to make contacts with other students in your classes, keep up on Canvas and the reading assignments, and for heaven’s sake, let your professors know what’s happening with you,” Arden-Ogle said.

Another option to alleviate flu symptoms is to take the flu shot. On Barkley’s Flu Public Service Announcement attachment, she said, “you can get the flu even if you received the flu vaccine… however if you received the vaccine, your illness may be less severe.”

Antonio Flores, a 24-year-old undeclared major, said that he hates getting the flu shot.

“I know it’s supposed to prevent your sickness from getting worse, but I still hate how I feel afterwards,” Flores said. “It especially sucks when you have younger siblings. I’ve heard that the flu has been so bad this year, it’s been killing kids.”

The children and elderly are known to be the primary victims of getting sick more easily, as seen on CDC’s FluView pie chart studies. According to a Sacramento Bee article, the St. Mary School in East Sacramento was shut down on Tuesday due to the attendance rate being so low. With 40 children and 11 of the faculty members absent, the school was not being able to find enough substitutes, causing the school to close down til Thursday morning.

“I know life doesn’t stop when someone gets sick, but if it’s so bad that kids are dying, people need to stay home,” Flores said.

Barkley said that one of the most common mistakes students make is going out in public when they should actually be home.

“Coughing not only compromises one’s own immune system/healing, [but] it also spreads communicable diseases to others,” said Barkley.

According to Barkley’s Flu PSA attachment and a video she’s linked on how to cough properly, because of how easily the flu can be spread, there are some simple preventative practices that can be done in order to prevent attracting it: washing your hands with soap, staying hydrated, and coughing away from your hands and into your fabric like sleeves, which halts the bacteria from spreading in the air.

For further questions in regards to influenza care, the Health Services Office is located in OPS-126 and can be reached at (916) 691-7584. To view the video on how to cough properly, visit this link: https://youtu.be/jDpMLCve6iE.